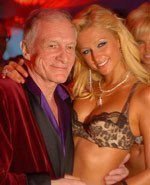 In the United States is a real star sale of housing.

The creator and owner of Playboy magazine, Hugh Hefner put up for sale a house in Beverly Hills, located next to his own residence for $ 28 million

Hollywood actor Val Kilmer is selling a ranch near the town of Santa Fe for $ 33 million, the buyer will receive nearly six miles front garden on the banks of Pecos River, habitat of fish and wildlife, including bears and red lynx.
Content tags: Overseas property celebrity real estate
Did you like the material?