Berezan is a city of regional subordination in the Kiev region

City Berezan - located in the eastern part of the Kiev region on the 75th kilometer of the highway Kyiv-Kharkiv (railway - 65 km).

The climate is temperate continental, mild, with warm long summers and mild, while volatile in the winter with little snow cover and frequent thaws.

Total area - 3292 hectares, representing 0.12% of the total territory of the Kiev region.

The town is bordered on all sides by human settlements Baryshevsky area.

Berezan - an ancient Cossack squadron town - located in the eastern part of the Kiev region. The first 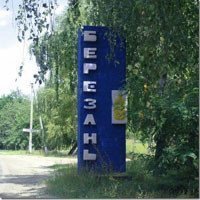 written mention of it recorded in the historical primary sources in 1616.

The city has a rich and glorious history, worthy of writing a historical novel. It has survived the Mongol-Tatar yoke, raiding Tartar hordes of the Crimean Khan Giray, the power of the Lithuanian princes and magnates of Poland, the war of liberation under the leadership of Bohdan Khmelnytsky, the war with the Swedes, serfdom, the power of the Russian Empire, a series of revolutions, civil war, the first and second world wars .

In 1927 Berezan filmmaker Arnold Kurdyumov was withdrawn one of the first full-length movies Ukrainian "Djalma.

Berezanka always been a freedom-loving, independent nation. In XVI-XVII centuries saturation Cossack families in the city was 54% - a phenomenon unique to the Ukraine. And now Berezan inhabited by descendants of the glorious Cossack families. Berezanka love their city, its history, reviving old traditions.

Together with the whole Ukraine, its talented and hardworking people, inhabitants of a proud and glorious Berezan look with hope to the future. They are confident that Ukraine will take its rightful and honorable place among the civilized nations of the planet Earth.