Poltava Region was created September 22, 1937
Geography: Located in the middle of the left-bank Ukraine. Much of the area lies within the borders of lowland. In the north it borders with the Chernihiv and Sumy, Kharkiv in the east, south of Dnipropetrovsk and Kirovohrad, west of Kiev and Cherkassy region of Ukraine. Protyazhnist territory from north to south - 213.5 km, and from West to East - 245 km.
Land area: 28.8 sq.. km, representing 4.8% of Ukraine. City value - 5, districts - 25, cities of regional importance - 10 districts in the cities - 5, urban villages - 21 villages - ponad1800 that associations in 467 rural councils.
Population: March 1 2008. in the number of present population was 1522.3 thousand people.
Foreign diyalnist.Investytsiyi. In 2007. main source of capital investments remain funds of enterprises and organizations through which spent 68.6% of the volume. The share of the state and local budgets amounted to 5.8%. Due to bank loans and other loans disbursed 16.1% of total capital investment, public spending on building their own apartments - 4.0%. Population in the construction of residential buildings invested 2.2% of total assets.
In 2007. enterprises, organizations and institutions from all sources of funding disbursed 6672.1 mln.
In 2007. 57.7% of total fixed capital investment was directed to the construction of buildings and structures, of which 17.5% - in construction of residential buildings.
Investment in residential construction totaled 672.3 mln. Their share in total investment in fixed assets amounted to 10.1%. Total volume of foreign direct investment in enterprises of Poltava on January 1, 2006. amounted to 287.8 million. United States, including from the CIS - 125.7 million (43.7%), with other countries - 162.1 million. United States (56.3%). Direct investment per capita area is 185 U.S. dollars.
Construction: During January-March 2008.companies in the region carried out construction works worth 416.3 mln.
In January-March 2008. increased volume of construction companies that performed work on the construction (at 63.5%) and have conducted training of building lots (at 0.5%). Companies that engaged in the construction of buildings and facilities, accounting for 55.6% of works carried out in January-March 2008., Increased construction at 18.5%. At the same time reducing the volume of construction companies that performed work on the equipment installation engineering constructions (at 22.4%).
The overwhelming proportion of the volume of construction (63.5%) in January-March 2008. performed by enterprises of Poltava.

Cities and villages in Poltava region 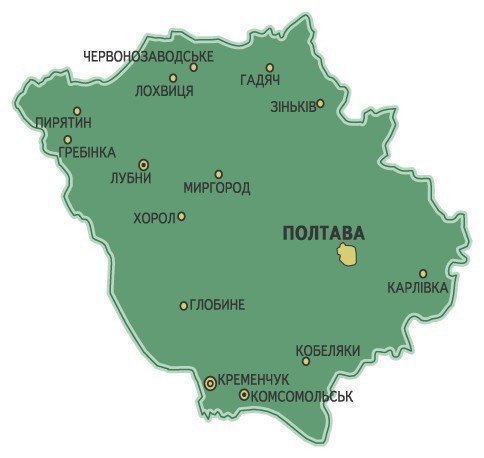