Dnipropetrovsk region: the villages, history, description, coat of arms, map of the area

The region was formed February 27, 1932.
Dnipropetrovsk region - one of the most economically developed regions of Ukraine. It is characterized by an advantageous geographical position, rich natural resources, powerful industrial and scientific potential, developed agriculture, a high level of transport and communications.
Distance from Dnipropetrovsk to Kyiv: by railway - 530 km, highway - 480 km.
On the territory of 31.9 thousand square kilometers. km (5.3% of the Ukraine) live, as of January 1, 2007, 3422.9 thousand people (7.3%). The high level of urbanization (83% of the population living in 66 towns) defines the highest in Ukraine population density - 108 people per square kilometer (the average in Ukraine - 77.4).
In the administrative-territorial against Dnipropetrovsk region is divided into 22 administrative districts and 13 cities of regional subordination, 40 settlements and 1438 villages
Construction: Building complex area of their capacities, assets, number of employees, volume of completed construction works has expressed general nature of the building and has 427 large and medium-sized enterprises and more than 4000 small. In the nearest plans - have been developed with the city government master plan for future development of the regional center, which is based on the new modern requirements for quality of life of citizens and future development. In 2007, in the commissioned 401.8 thousand square kilometers. housing estate.
Foreign economic and investment activity: foreign trade turnover of goods of Ukraine in the Dnipropetrovsk region accounted for 13%, including 18.5% - 8.6% and exports - imports state. Foreign trade commodity transactions carried out with the region 161 partners worldwide. Exports served 993 area businesses and 44 individuals, imports - 1881 and 124 respectively.
The volume of foreign investments the region takes second place in Ukraine. Dnipropetrovsk region first among other regions of Ukraine broke the one billion milestone in attracting foreign investments. In 2006, foreign direct investment in the region increased by almost 35%. The largest proportion of foreign investment is directed to the development of the industry - 55.8%, trade - 25.0%, transport and communication - 3.0% in real estate, renting and services - 11.6%, other - 4.6%. Foreign direct investment made by non-residents 64 countries.
The largest volume of direct investments come from Europe - 60.1%, Asia - 23.1%, Americas - 14.9%, Africa - 0.3%, Australia and Oceania - 0.2%.
Financial Activities: A wide range of services provided
1381 banking institution, including 14 independent banks entities.
Trade: The region has 26 stock exchanges, one of the most well-known in Ukraine - Pridneprovskaya Mercantile Exchange.
Consumer market has more than 5 thousand commercial establishments, including Shop - 3914 units and 2.2 thousand enterprises restaurants all forms of ownership.
Cities and villages of Dnepropetrovsk region 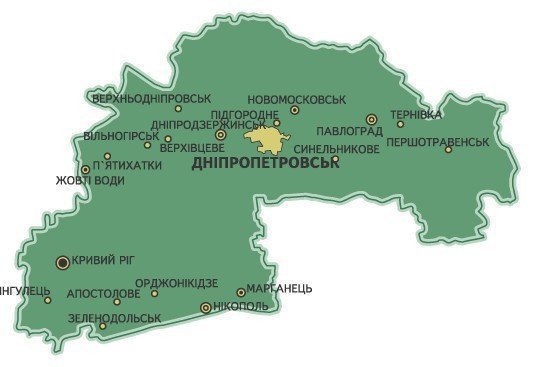