Official name: The United Arab Emirates (also the UAE or the Emirates)

Climate: dry, transitional from tropical to subtropical. The temperature from November to may varies between +18 up to +25 °С, and from june to August – from +30 up to +35 °С.

Political Structure: A Federal State. There are 7 emirates: Abu Dhabi, Ajm?n, Dubai, Fujairah, Ras al-Khaimah, Sharjah, and Umm al-Quwain. Each emirate is an Absolute Monarchy and reserves a self-dependency. Due to the constitution of 1971, the head of the government is The Federal Supreme Council, comprising of the leaders of the seven emirates. HH Sheikh Khalifa bin Zayed Al Nahyan, Ruler of Abu Dhabi, was elected as the new President of the United Arab Emirates on 3 November 2004, to succeed his father, the late HH Sheikh Zayed bin Sultan Al Nahyan, UAE President from 1971 to 2004.

The UAE is a member of the UNO (since 1971), and of OPEC, The Organization of the Petroleum Exporting Countries, of the International Monetary Fund, the World Trade Organization (WTO), and also of AGCC.

Emirates: Abu Dhabi is the biggest of the seven emirates, it comprises of the Abu Dhabi city and oasis cities Al Ain and Liwa.

The second biggest emirate is Dubai. It is the world famous trade center, known for it’s gold, silk, fish and spice markets. The Sharjah emirate – is the only emirate that has alcohol prohibitions. Ajm?n – is the smallest emirate.
The Ras al-Khaimah emirate – is the most northern and fruitful emirate.
The Umm al-Quwain emirate has a very jagged coast line.
The Fujairah emirate is located on the coast of Gulf of Oman, right in the heart of the Khadjar mountains. The pride of the emirate are sandy beaches, mountain capes, picturesque canyons.

Currency: Dihram - 1 dihram = $0,27 (June 2007). You may as well purchase the goods in the US dollars.
Оfficial language: Arabic, English is widely spoken as well.

Time zone: Equal with the Moscow time in Summer. There is no summer and winter time in the emirates, so it is +1 hour different during the winter time.

How to get there: Dubai – is the main transport unit in Persian Gulf. There are regular direct flights Moscow – Dubai with «Siberia», «Aeroflot» and “Emirates” airlines. Moreover, there are charter flights from Russia to Emirates all the year round. 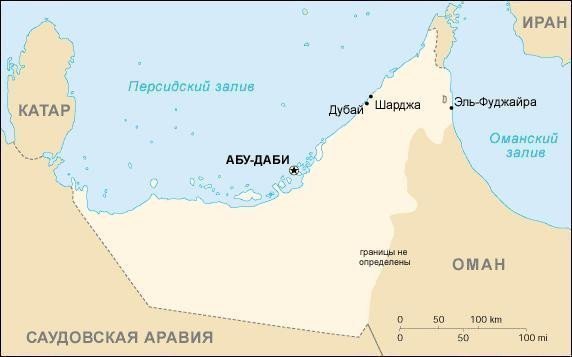