Cyprus is the third largest island in the Mediterranean (after the Italian islands of Sicily and Sardinia) and the world's 81st largest. It measures 240 kilometres latitudinally and 100 km longitudinally, with Turkey 75 km to the north. Other neighbouring territories include Syria and Lebanon to the east (105 km and 108 km, respectively), Israel 200 km to the southeast, Egypt 380 km to the south, and Greece to the west-northwest: 280 km to the small Dodecanesian island of Kastell?rizo (Mey?sti), 400 km to Rhodes, and 800 km to the Greek mainland.

The physical setting for life on the island is dominated by the mountain masses and the central plain they encompass, the Mesaoria. The Troodos Mountains cover most of the southern and western portions of the island and account for roughly half its area. The narrow Kyrenia Range, extending along the northern coastline, occupies substantially less area, and elevations are lower.

Geopolitically, the island is subdivided into four main segments. The Republic of Cyprus, the internationally recognised government, occupies the southern two-thirds of the island (59.74%). The Turkish Republic of Northern Cyprus occupies the northern third (34.85%) of the island and is recognised only by Turkey, as it consists of the Turkish-occupied areas. The United Nations-controlled Green Line is a buffer zone that separates the two and covers 2.67% of the island. Lastly, two bases under British sovereignty are located on the island: Akrotiri and Dhekelia, covering the remaining 2.74%.
Districts
Main articles: Districts of Cyprus and List of cities, towns and villages in Cyprus

Cyprus has four exclaves, all in territory that belongs to the British Sovereign Base Area of Dhekelia. The first two are the villages of Ormidhia and Xylotymvou. The third is the Dhekelia Power Station, which is divided by a British road into two parts. The northern part is an exclave, like the two villages, whereas the southern part is located by the sea and therefore not an exclave, although it has no territorial waters of its own.[36] The UN buffer zone runs up against Dhekelia and picks up again from its east side off Ayios Nikolaos, connected to the rest of Dhekelia by a thin land corridor, and in that sense the buffer zone turns the southeast corner of the island, the Paralimni area, into a de facto, though not de jure, exclave.

Pyrgos is a de facto exclave of the government-controlled part of the island. It is the only Greek Cypriot town located on the TRNC-controlled Morphou Bay.


The Cypriot economy is prosperous and has diversified in recent years.[42] According to the latest IMF estimates, its per capita GDP (adjusted for purchasing power) is, at $28,381, just above the average of the European Union.[43] Cyprus has been sought as a base for several offshore businesses for its highly developed infrastructure. Economic policy of the Cyprus government has focused on meeting the criteria for admission to the European Union. Adoption of the euro as a national currency is required of all new countries joining the European Union, and the Cypriot government adopted the currency on 1 January 2008.[42] Oil has recently been discovered in the seabed between Cyprus and Egypt, and talks are underway between Lebanon and Egypt to reach an agreement regarding the exploration of these resources.[44] The seabed separating Lebanon and Cyprus is believed to hold significant quantities of crude oil and natural gas.[44] However, the Turkish Navy doesn't allow the exploration of oil in the region.[44][45]

The economy of the Turkish-occupied area (effectively a district of the Mersin Province) is dominated by the services sector, including the public sector, trade, tourism and education, with smaller agriculture and light manufacturing sectors. The economy operates on a free-market basis, although it continues to be handicapped by the political isolation of Turkish Cypriots, the lack of private and governmental investment, high freight costs, and shortages of skilled labor. Despite these constraints, the economy turned in an impressive performance in 2003 and 2004, with growth rates of 9.6% and 11.4%. The average income in the area was $15,984 in 2008.[46] Growth has been buoyed by the relative stability of the Turkish new lira and by a boom in the education and construction sectors. The island has witnessed a massive growth in tourism over the years and as such the property rental market in Cyprus has grown along side. Added to this is the capital growth in property that has been created from the demand of incoming investors and property buyers to the island.[47]
[edit] Demographics
Main article: Demographics of Cyprus
Population distribution of Cyprus
Population growth (numbers for the entire island, excluding in recent years some 150,000 Turkish immigrants residing in Northern Cyprus).
Population structure.

According to the first population census after the declaration of independence, carried out in December 1960 and covering the entire island, Cyprus had a total population of 573,566, with Greek Cypriots comprising 77% of the island's population and Turkish Cypriots 18% (other nationals accounted for the remaining 5%).[48] According to the last census covering the entire island (April 1973), the population of Cyprus was 631,778 with the Turkish Cypriots estimated at 19% of the total (about 120,000).[49]

Cyprus has seen a large influx of guest workers from countries such as Thailand, the Philippines, and Sri Lanka, as well as major increases in the numbers of permanent Russian, British or other EU residents. Sizeable communities from Russia and Ukraine (mostly Pontic Greeks, immigrating after the fall of the Eastern Bloc), Bulgaria, Romania, and Eastern European states. By the end of 2007, about 124,000 immigrants settled in Cyprus, the three largest groups being 37,000 Greeks, 27,000 Britons, and 10,000 Russians. The island is also home to a Maronite minority of 6,000, an Armenian minority of around 2,000, and refugees mainly from Serbia, Palestine, and Lebanon. There is also a Kurdish minority present in Cyprus.

Outside Cyprus there is a significant and thriving Cypriot diaspora in other countries, within the United States, the United Kingdom, Greece and Australia hosting the majority of migrants who left the island after the de facto division in 1974. Specifically in the United Kingdom it is estimated that there are 150,000 Cypriots. 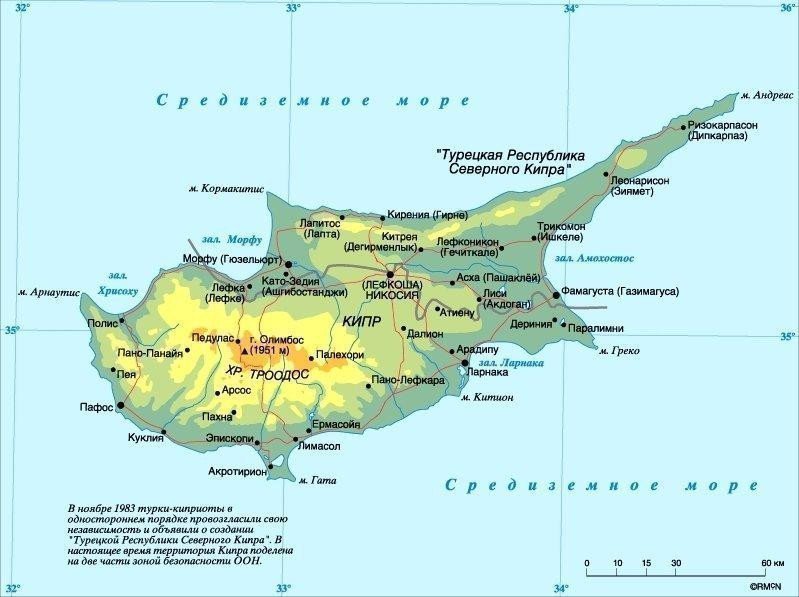