Location: The Kingdom of Thailand, previously known as Siam - the country of Southeast Asia located in a southwest part of peninsula Indochina and in northern part of Malay peninsula. It shares a border with Cambodia to the east, Laos to the northeast, Myanmar to the west, and Malaysia to the south. The Kingdom borders two bodies of water—the Gulf of Thailand to the south and the Indian Ocean to the west.

Large cities and resorts: the Largest city of the country – Bangkok. Chiang Mai - the center of a political, economic and cultural life of Northern Thailand.
Pattaya - the basic resort of the country which have brought to Thailand glory of tourist Mecca.
Phuket - the biggest island of Thailand, has the shape of a wrong pearl on a map.

Population: the population of Thailand stand at 64 million, about 8 million of whom live in the capital city of Bangkok. The largest ethnic minority is the Chinese. Other ethnic groups present in Thailand include Malays, Cambodians, Vietnamese, and Indians.

Language: The official language, spoken by almost 100 percent of the population, is Thai. English is widely spoken in Bangkok and other major metropolitan areas.

Political situation: Thailand is the only country in Southeast Asia that has never been colonized. Its government structure has undergone gradual and practical evolution in response to the changing environment. Since 1932, Thailand has been a constitutional monarchy, with a king as head of state and a parliamentarian form of government.

Thailand is a member of the United Nations and enters into Association of the states of Southeast Asia (АСЕАН) and Asian - Pacific economic conference.

Time zones: the Difference in time with Moscow: +3 hours during action across Russia summertime, +4 hours during winter time.

Climate: Thailand is a warm and rather humid tropical country. The climate is monsoonal, marked by a pronounced rainy season lasting from about May to September and a relatively dry season for the remainder of the year. Temperatures are highest in March and April and lowest in December and January. The average temperature is 23.7 to 32.5 degrees Celsius.

Religion: Buddhism is the faith of approximately 95 percent of the population. Islam, Christianity, Hinduism, and other faiths are also openly practiced and protected under the Constitution.

National Day: December 5, the birthday of His Majesty King Bhumibol Adulyadej, is generally regarded as National Day. This day is a public holiday.

How to get there: Thailand has 23 airports and six international airports, namely Don Muang, Phuket, Hat Yai, Chiang Mai, Chiang Rai, and U-Tapao. All except U-Tapao are operated by the Airports Authority of Thailand.

Direct regular flights are only from Moscow to Bangkok ("Aeroflot", Thai Airways, in the winter also "Siberia").
From Moscow it is better to fly through Dubai or Doha, from Petersburg - through Kiev ("Aeroretinues") or Tashkent. 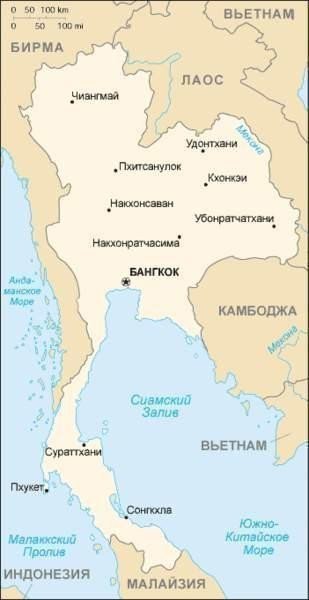