On the west, Spain borders Portugal; on the south, it borders Gibraltar (a British overseas territory) and Morocco, through its cities in North Africa (Ceuta and Melilla). On the northeast, along the Pyrenees mountain range, it borders France and the tiny principality of Andorra. Spain also includes the Balearic Islands in the Mediterranean Sea, the Canary Islands in the Atlantic Ocean and a number of uninhabited islands on the Mediterranean side of the strait of Gibraltar, known as Plazas de soberan?a, such as the Chafarine islands, the isle of Albor?n, the "rocks" (pe?ones) of V?lez and Alhucemas, and the tiny Isla Perejil. Along the Pyrenees in Catalonia, a small exclave town called Ll?via is surrounded by France. The little Pheasant Island in the River Bidasoa is a Spanish-French condominium.

Mainland Spain is dominated by high plateaus and mountain ranges, such as the Sierra Nevada. Running from these heights are several major rivers such as the Tagus, the Ebro, the Duero, the Guadiana and the Guadalquivir. Alluvial plains are found along the coast, the largest of which is that of the Guadalquivir in Andalusia.
Climate
Spanish climatic areas (Canary islands's subtropical climate is not represented in this map).

Due to Spain's geographical situation and orographic conditions, the climate is extremely diverse; discounting the mountain climate, it can be roughly divided into five areas: 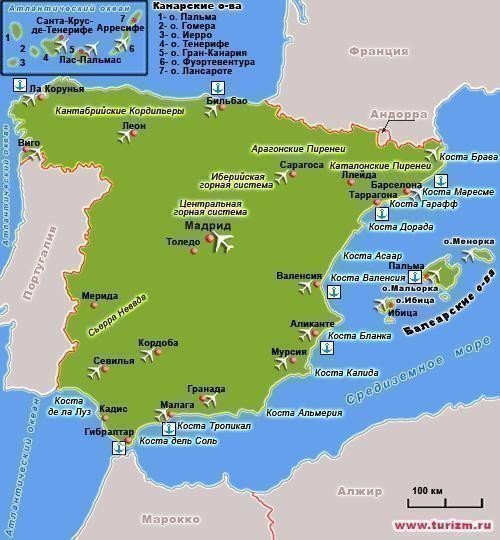 Main articles: Autonomous communities of Spain and Provinces of Spain

The government of all autonomous communities must be based on a division of powers comprising:

* a Legislative Assembly whose members must be elected by universal suffrage according to the system of proportional representation and in which all areas that integrate the territory are fairly represented;
* a Government Council, with executive and administrative functions headed by a president, elected by the Legislative Assembly and nominated by the King of Spain;
* a Supreme Court of Justice, under the Supreme Court of the State, which head the judicial organization within the autonomous community.

Besides Andalusia, Catalonia, the Basque Country and Galicia, which identified themselves as nationalities, other communities have also taken that denomination in accordance to their historical regional identity, such as the Valencian Community,[45] the Canary Islands,[46] the Balearic Islands,[47] and Aragon.[48]

The autonomous communities have wide legislative and executive autonomy, with their own parliaments and regional governments. The distribution of powers may be different for every community, as laid out in their Statutes of Autonomy. There used to be a clear de facto distinction between so called "historic" communities (Basque Country, Catalonia, Galicia, Andalusia) and the rest. The "historic" ones initially received more functions, including the ability of the regional presidents to choose the timing of the regional elections (as long as they happen no more than four years apart). As another example, the Basque Country, Navarre and Catalonia have full-range police forces of their own: Ertzaintza in the Basque Country, Polic?a Foral in Navarre and Mossos d'Esquadra in Catalonia. Other communities have a more limited force or none at all (like the Polic?a Aut?noma Andaluza[49] in Andalusia or the BESCAM in Madrid). However, the recent amendments made to their respective Statute of Autonomy by a series of "ordinary" Autonomous Communities such as the Valencian Community or Aragon have quite dilluted this original de facto distinction.
Subdivisions

Autonomous communities are composed of provinces (provincias), which serve as the territorial building blocks for the former. In turn, provinces are composed of municipalities (municipios). The existence of these two subdivisions is granted and protected by the constitution, not necessarily by the Statutes of Autonomy themselves. Municipalities are granted autonomy to manage their internal affairs, and provinces are the territorial divisions designed to carry out the activities of the State.[50]

The Spanish Constitution of 1978, in its second article, recognises historic entities ("nationalities", a carefully chosen word in order to avoid the more politically charged "nations") and regions, within the context of the Spanish nation. For some people, Spain's identity consists more of an overlap of different regional identities than of a sole Spanish identity. Indeed, some of the regional identities may even conflict with the Spanish one.[clarification needed] Distinct cultural groups within Spain include the Basques, Catalans, and Galicians.[82]

It is this last feature of "shared identity" between the more local level or Autonomous Community and the Spanish level which makes the identity question in Spain complex and far from univocal.
Minority groups

Spain has a number of descendants of populations from former colonies (especially Equatorial Guinea) and immigrants from several Sub-Saharan and Caribbean countries have been recently settling in Spain. There are also sizeable numbers of Asian immigrants, most of whom are of Chinese, Filipino, Middle Eastern, Pakistani and Indian origins; the population of Spaniards of Latin American descent is sizeable as well and a fast growing segment. Other growing groups are Britons, 760,000 in 2006, Germans and other immigrants from the rest of Europe.[83]

The arrival of the Gitanos, a Romani people, began in the 16th century; estimates of the Spanish Gitano population fluctuate around 700,000.[84] The Mercheros (also Quinquis) are a minority group, formerly nomadic, that share a lot of the way of life of Gitanos. Their origin is unclear.
Immigration
Main article: Immigration to Spain

According to the Spanish government there were 4.5 million foreign residents in Spain in 2007; independent estimates put the figure at 4.8 million people, or 11% of the total population.[85] According to residence permit data for 2005, about 500,000 were Moroccan, another 500,000 were Ecuadorian, more than 200,000 were Romanian, and 260,000 were Colombian. Other sizeable foreign communities are British (8%), French (8%), Argentine (6%), German (6%) and Bolivian (3%). Since 2000, Spain has experienced high population growth as a result of immigration flows, despite a birth rate that is only half the replacement level. This sudden and ongoing inflow of immigrants, particularly those arriving clandestinely by sea, has caused noticeable social tension.[86]

Within the EU, Spain has the second highest immigration rate in percentage terms after Cyprus, but by a great margin, the highest in absolute numbers.[87] There are a number of reasons for the high level of immigration, including Spain's cultural ties with Latin America, its geographical position, the porosity of its borders, the large size of its underground economy and the strength of the agricultural and construction sectors, which demand more low cost labour than can be offered by the national workforce. Another statistically significant factor is the large number of residents of EU origin typically retiring to Spain's Mediterranean coast. In fact, Spain was Europe's largest absorber of migrants from 2002 to 2007, with its immigrant population more than doubling as 2.5 million people arrived.[88] According to the Financial Times, Spain is the most favoured destination for West Europeans considering a move from their own country and seeking jobs elsewhere in the EU.[89]

The number of immigrants in Spain has grown up from 500,000 people in 1996 to 5.2 million in 2008 out of a total population of 46 million.[90][91] In 2005 alone, a regularisation programme increased the legal immigrant population by 700,000 people.[92] Unemployment among immigrants has risen 67% in 2007. Spain's new Plan of Voluntary Return encourages immigrants to leave Spain for three years and offers up to ?25,000, but so far, only 186 Ecuadorans have signed up to return.[93][94] In the program's first two months last year, just 1,400 immigrants took up the offer.[95]
The languages of Spain (simplified)
Spanish official; spoken all over the country Catalan/Valencian, co-official Basque, co-official Galician, co-official Aranese, co-official (dialect of Occitan) Asturian, recognised Aragonese, unofficial Leonese, unofficial Extremaduran, unofficial Fala, unofficial
Languages
Main article: Languages of Spain

Spanish (espa?ol or castellano, Castilian) is spoken all over the country and so is the only language with official status nationwide. But a number of regional languages have been declared co-official, along with Spanish, in the constituent communities where they are spoken:

* Basque (euskera) (2%) in the Basque Country and Navarre;
* Catalan (catal?) (17%) in Catalonia and the Balearic Islands; Valencian (valenci?), a distinct variant of Catalan, is official in the Valencian Community;
* Galician (galego) (7%)[96] in Galicia.

There are also some other surviving Romance minority languages such as the Astur-Leonese group, which includes two languages in Spain: Asturian (officially called "Bable") which has protected status in Asturias, and Leonese, which is protected in Castile and Le?n. Aragonese is vaguely recognized in Aragon.[97] Unlike Basque, Catalan/Valencian and Galician, these languages do not have any official status. This might be due to their very small number of speakers, a less significant written tradition in comparison to Catalan or Galician, and lower self-awareness of their speakers which traditionally meant lack of strong popular demand for their recognition in the regions in which they are spoken.[98] In the North African Spanish city of Melilla, Tarifit is spoken by a significant part of the population. In the tourist areas of the Mediterranean coast and the islands, English and German are widely spoken by tourists, foreign residents, and tourism workers.
Sign
Registration   Forgot password