Montenegro (en-us-Montenegro.ogg ?m?nt??ne??ro?/ (help·info) or ?m?nt??ni??ro?/), (Montenegrin: Црна Гора/Crna Gora, CrnaGora.ogg listen (help·info)) (meaning "Black Mountain" in Montenegrin) is a country located in Southeastern Europe. It has a coast on the Adriatic Sea to the south-west and is bordered by Croatia to the west, Bosnia and Herzegovina to the northwest, Serbia to the northeast, Kosovo to the east and Albania to the south [3]. Its capital and largest city is Podgorica, while Cetinje is designated as the Prijestonica (Пријестоница), meaning the former Royal Capital City.[4].

The thousand-year history of the Montenegrin state begins in the 9th century with the emergence of Duklja, a vassal state of Byzantium. In those formative years, Duklja was ruled by the Vojislavljevic dynasty. In 1042, at the end of his 25-year rule, King Vojislav won a decisive battle near Bar against Byzantium, and Duklja became independent. Duklja's power and prosperity reached their zenith under King Vojislav's son, King Mihailo (1046-81), and his son King Bodin (1081-1101).[5]. From the 11th century, it started to be referred to as Zeta. It ended with its incorporation into Raska, and beginning with the Crnojevic dynasty, Zeta was more often referred to as Crna Gora or by the Venetian term monte negro. A sovereign principality[6] since the Late Middle Ages, Montenegro saw its independence from the Ottoman Empire formally recognized in 1878. From 1918, it was a part of various incarnations of Yugoslavia. On the basis of a referendum held on 21 May 2006, Montenegro declared independence on 3 June.

Montenegro is a member of the United Nations, the Organization for Security and Co-operation in Europe, the Council of Europe and CEFTA. Montenegro is also a potential candidate for membership of the European Union and NATO. Montenegro presented its official application to the European Union, with the hopes of gaining EU candidate status by 2009,[7] and applied for a Membership Action Plan on November 5, 2008, with the hopes it would be accepted in 2009.[8]. Additionally, Montenegro is a founding member of the Union for the Mediterranean upon its establishment in 2008.

Montenegro ranges from high peaks along its borders with Serbia and Albania, a segment of the Karst of the western Balkan Peninsula, to a narrow coastal plain that is only one to four miles (6 km) wide. The plain stops abruptly in the north, where Mount Lov?en and Mount Orjen plunge into the inlet of the Bay of Kotor.

The mountains of Montenegro include some of the most rugged terrain in Europe. They average more than 2,000 metres (6,560 ft) in elevation. One of the country's notable peaks is Bobotov Kuk in the Durmitor mountains, which reaches a height of 2,522 metres (8,274 ft). The Montenegrin mountain ranges were among the most ice-eroded parts of the Balkan Peninsula during the last glacial period.

According to Eurostat data, Montenegrin PPS GDP per capita stood at 46 per cent of the EU average in 2008.[28]

Aluminum and steel production and agricultural processing make up for most of Montenegrin industry.

Tourism is an important contributor to Montenegrin economy. Approximately one million tourists visited Montenegro in 2007, resulting in ?480 million of tourism revenue. Tourism is the backbone of future economic development strategy for Montenegro.

The growth of the Montenegrin economy may be hampered by significant dependence on foreign direct investment, and thus susceptibility to external shocks and high export/import trade deficit .
[edit] Infrastructure
Main article: Transport in Montenegro
Podgorica Airport

Montenegrin road infrastructure is not on par with European standards. Although the road network is extensive, there are no roads built to full motorway standards. The projects that should change that fact include Bar - Boljare motorway and Montenegrin section of Adriatic Ionian motorway. Building of those motorways is considered as national priority, as both are important for uniform regional economic development of Montenegro, and development of Montenegro as an elite tourist destination.

Current European routes that pass through Montenegro are E65 and E80.

The backbone of the Montenegrin rail network is the Belgrade - Bar railway. This railway intersects with Nik?i? - Tirana(Albania) at Podgorica, however, this railway is not used for passenger service.

Montenegro has two international airports, at Podgorica and Tivat. The two airports served 1,1 million passengers in 2008. Montenegro Airlines is the flag carrier of Montenegro.

Montenegro is well suited for development of all kinds of tourism, as it has both a picturesque coast and a mountainous northern region. The country was a well-known tourist spot in the 1980s, yet, the Yugoslav wars that were fought in neighboring countries during the 1990s crippled the tourist industry and destroyed the image of Montenegro as a tourist destination.

It was not until 2000s that the tourism industry began to recover, and the country has since experienced a high rate of growth in the number of tourist visits and overnight stays. The Government of Montenegro has set the development of Montenegro as an elite tourist destination a top priority. It is a national strategy to make tourism a major, if not the single largest, contributor to the Montenegrin economy. A number of steps were taken to attract foreign investors into Montenegro's tourism industry. Some large projects are already under way, such as Porto Montenegro, while other locations, like Jaz Beach, Buljarica, Velika Pla?a and Ada Bojana, have perhaps the greatest potential to attract future investments and become premium tourist spots on the Adriatic. Some of the problems that currently hamper the development of Montenegrin tourism are inadequate infrastructure, notably the road infrastructure in the north, and electricity and water supply in the south of the country. The informal construction is also a problem. 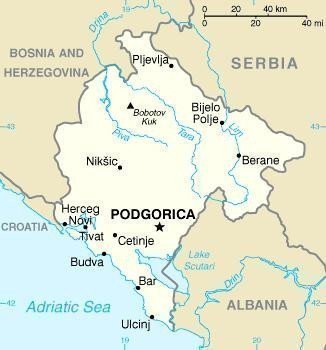