Location: a state in the south of Europe, on the Balkan Peninsula. It borders on Albania, Macedonia and Bulgaria in the North, and on Turkey in the north-east.

More than a thousand of islands belong to Greece, the biggest of them are: Crete, Ewia, Rodos, Lesbos, Chios, аs well as Ionic Archipelago, the Cyclades, Northern and Southern Sporades.

Population: 11 mln. people (end of 2006). Ethnical groups: about 95% of the residents are greeks , the rest are Turks, Macedonians, Albanians, Armenians, Russians.

Climate: subtropical Mediterranean. It varies depending on the area. The summer is hot and dry, the temperature in July-August is +25-28 С (sometimes even + 40-45 С). The winter is mild (January - 4-12 С) and rainy. Only in the mountain region it falls below zero.

The political structure: It is a parliamentary republic. The head of the state is the president, who is elected by the parliament for 5 years and may be reelected for the second term.

Religion: Most of the Greeks are Orthodoxies. 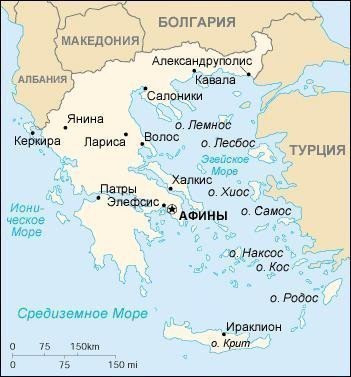