Germany shares borders with more European countries than any other country on the continent. Its neighbours are Denmark in the north, Poland and the Czech Republic in the east, Austria and Switzerland in the south, France and Luxembourg in the south-west and Belgium and the Netherlands in the north-west.

Most of Germany has a temperate seasonal climate in which humid westerly winds predominate. The climate is moderated by the North Atlantic Drift, which is the northern extension of the Gulf Stream. This warmer water affects the areas bordering the North Sea including the area along the Rhine, which flows into the North Sea. Consequently in the north-west and the north, the climate is oceanic; rainfall occurs year round with a maximum during summer.

Winters are mild and summers tend to be cool, though temperatures can exceed 30 °C (86 °F) for prolonged periods. In the east, the climate is more continental; winters can be very cold, summers can be very warm, and long dry periods are often recorded. Central and southern Germany are transition regions which vary from moderately oceanic to continental. Again, the maximum temperature can exceed 30 °C (86 °F) in summer.[30][31]
Biodiversity
Deer is a widespread species to be found in the wild.

Phytogeographically, Germany is shared between the Atlantic European and Central European provinces of the Circumboreal Region within the Boreal Kingdom. The territory of Germany can be subdivided into four ecoregions: the Atlantic mixed forests, Baltic mixed forests, Central European mixed forests and Western European broadleaf forests.[32] The majority of Germany is covered by either arable land (33%) or forestry and woodland (31%). Only 15% is covered by permanent pastures.
Around one third of the country's area is covered with forests. (Thuringian Forest)

Plants and animals are those generally common to middle Europe. Beeches, oaks, and other deciduous trees constitute one-third of the forests; conifers are increasing as a result of reforestation. Spruce and fir trees predominate in the upper mountains, while pine and larch are found in sandy soil. There are many species of ferns, flowers, fungi, and mosses. Fish abound in the rivers and the North Sea. Wild animals include deer, wild boar, mouflon, fox, badger, hare, and small numbers of beaver. Various migratory birds cross Germany in the spring and autumn.

Germany is known for its many zoological gardens, wildlife parks, aquaria, and bird parks.[33] More than 400 registered zoos and animal parks operate in Germany, which is believed to be the largest number in any single country of the world.[34] The Zoologischer Garten Berlin is the oldest zoo in Germany and presents the most comprehensive collection of species in the world.[35]
Environment
The largest wind farm and solar power capacity in the world is installed in Germany.[36]

Germany is known for its environmental consciousness.[37] Most Germans consider anthropogenic causes to be a significant factor in global warming.[38] The state is committed to the Kyoto protocol and several other treaties promoting biodiversity, low emission standards, recycling, and the use of renewable energy, and supports sustainable development at a global level.[39]
The eagle is a protected bird of prey and the national heraldic animal.

The German government has initiated wide ranging emission reduction activities and the country?s overall emissions are falling.[40] Nevertheless Germany's carbon dioxide emissions per capita are among the highest in the EU, although they are significantly lower than those of Australia, Canada, Saudi Arabia and the United States.

Emissions from coal-burning utilities and industries contribute to air pollution. Acid rain, resulting from sulphur dioxide emissions, is damaging forests. Pollution in the Baltic Sea from raw sewage and industrial effluents from rivers in former East Germany have been reduced. The government under Chancellor Schr?der announced the intention to end the use of nuclear power for producing electricity. Germany is working to meet EU commitments to identify nature preservation areas in line with the EU's Flora, Fauna, and Habitat directive. Germany's last glaciers in the Alpine region are experiencing deglaciation. Natural hazards are river flooding in spring and stormy winds occurring in all regions.

Government
Main article: Politics of Germany
The Reichstag in Berlin is the site of the German parliament.

Germany is a federal, parliamentary, representative democratic republic. The German political system operates under a framework laid out in the 1949 constitutional document known as the Grundgesetz (Basic Law). By calling the document Grundgesetz, rather than Verfassung (constitution), the authors expressed the intention that it would be replaced by a proper constitution once Germany was reunited as one state. Amendments to the Grundgesetz generally require a two-thirds majority of both chambers of the parliament; the articles guaranteeing fundamental rights, the separation of powers, the federal structure, and the right to resist attempts to overthrow the constitution are valid in perpetuity and cannot be amended.[41] Despite the initial intention, the Grundgesetz remained in effect after the German reunification in 1990, with only minor amendments.
President Horst K?hler.

The Bundeskanzler (Federal Chancellor)—currently Angela Merkel—is the head of government and exercises executive power, similar to the role of a Prime Minister in other parliamentary democracies. Federal legislative power is vested in the parliament consisting of the Bundestag (Federal Diet) and Bundesrat (Federal Council), which together form a unique type of legislative body. The Bundestag is elected through direct elections, by proportional representation (mixed-member). The members of the Bundesrat represent the governments of the sixteen federal states and are members of the state cabinets. The respective state governments have the right to appoint and remove their envoys at any time.

Since 1949, the party system has been dominated by the Christian Democratic Union and the Social Democratic Party of Germany with all chancellors hitherto being member of either party. However, the smaller liberal Free Democratic Party (which has had members in the Bundestag since 1949) and the Alliance '90/The Greens (which has controlled seats in parliament since 1983) have also played important roles,[42] as they are regularly the smaller partner of a coalition government.

The Judiciary of Germany is independent of the executive and the legislative branches. Germany has a civil or statute law system that is based on Roman law with some references to Germanic law. The Bundesverfassungsgericht (Federal Constitutional Court), located in Karlsruhe, is the German Supreme Court responsible for constitutional matters, with power of judicial review.[43] It acts as the highest legal authority and ensures that legislative and judicial practice conforms to the Basic Law for the Federal Republic of Germany (Basic Law). It acts independently of the other state bodies, but cannot act on its own behalf.
Basic Law for the Federal Republic of Germany, 1949.

Germany's supreme court system, called Oberste Gerichtsh?fe des Bundes, is specialised. For civil and criminal cases, the highest court of appeal is the Federal Court of Justice, located in Karlsruhe and Leipzig. The courtroom style is inquisitorial. Other Federal Courts are the Federal Labour Court in Erfurt, the Federal Social Court in Kassel, the Federal Finance Court in Munich and the Federal Administrative Court in Leipzig.

Criminal law and private law are codified on the national level in the Strafgesetzbuch and the B?rgerliches Gesetzbuch respectively. The German penal system is aimed towards rehabilitation of the criminal; its secondary goal is the protection of the general public.[44] To achieve the latter, a convicted criminal can be put in preventive detention (Sicherungsverwahrung) in addition to the regular sentence if he is considered to be a threat to the general public. The V?lkerstrafgesetzbuch regulates the consequences of crimes against humanity, genocide and war crimes. It gives German courts universal jurisdiction if prosecution by a court of the country where the crime was committed, or by an international court, is not possible.
German state police officer in Hamburg.
State legislation
Main article: Law enforcement in Germany

Any federal law overrides state law if the legislative power lies at the federal level. A famous example is the purported Hessian provision for the death penalty, which goes against the ban on capital punishment under the Basic Law, rendering the Hessian provision invalid. The Bundesrat is the federal organ through which the states participate in national legislation. State participation in federal legislation is necessary if the law falls within the area of concurrent legislative power, requires states to administer federal regulations, or is so designated by the Basic Law. Every state has its own constitutional court. The Amtsgerichte, Landgerichte and Oberlandesgerichte are state courts of general jurisdiction. They are competent whether the action is based on federal or state law. 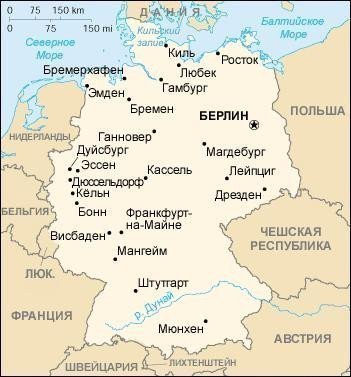