Location: A state in the western Europe. It borders on Spain, Italy, Swiss, Germany and Belgium. it is separated from England by the English channel and Pas-de-Calais in the North. In the west it is washed by the waters of Golfe de Gascogne of the Atlantic, and by the Mediterranean sea in the South.

France also has it’s domains in America, Africa and Oceania. Their total area is – 127000 sq. km. with the population of 1,5 mln. people. The main ones are: Guyane, Guadeloupe, Martinique, R?union, New Caledonia, French Polinesia.

Population: 63,4 mln people (January 2007 ). Appx. 95% of the population are the French. The other ethnical groups are: Corsicans, Germans, Algerians, Italians, Portuguese, Turks, the Moors.

How to get there: there are direct flights to Paris from Moscow, St. Petersburg and Ekaterinenburg.

Religion: most of the French are Catholics. About 1 mln. are Protestants . There are a lot of Moslems , and the biggest in Europe Jewish community. 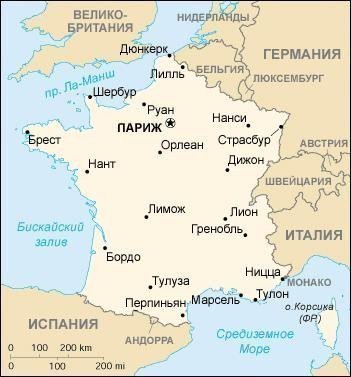