Bulgaria is a country of outstanding natural beauty where great attention is paid to environmental protection and is home to several UNESCO world heritage sites. There are 49 protected territories, 17 biosphere reserves (the largest number in Europe)

Geographically and in terms of climate, Bulgaria features notable diversity with the landscape ranging from the Alpine snow-capped peaks in Rila, Pirin and the Balkan Mountains to the mild and sunny Black Sea coast; from the typically continental Danubian Plain (ancient Moesia) in the north to the strong Mediterranean climatic influence in the valleys of Macedonia and in the lowlands in the southernmost parts of Thrace.

Bulgaria overall has a temperate climate, with cold winters and hot summers. The barrier effect of the Balkan Mountains has some influence on climate throughout the country: northern Bulgaria experiences lower temperatures and receives more rain than the southern lowlands.
The Trigrad Gorge
Lake Mandrensko

Bulgaria comprises portions of the regions known in classical times as Moesia, Thrace, and Macedonia. The mountainous southwest of the country has two alpine ranges — Rila and Pirin — and further east stand the lower but more extensive Rhodope Mountains. The Rila range includes the highest peak of the Balkan Peninsula, Musala, at 2,925 metres (9,596 ft); the long range of the Balkan mountains runs west-east through the middle of the country, north of the famous Rose Valley. Hilly country and plains lie to the southeast, along the Black Sea coast, and along Bulgaria's main river, the Danube, to the north. Strandzha is the largest mountain in the southeast. Few mountains and hills exist in the northeast region of Dobrudzha. The Balkan Peninsula derives its name from the Balkan or Stara planina mountain range running through the centre of Bulgaria and extends into eastern Serbia.

Bulgaria has large deposits of manganese ore in the north-east and of uranium in the south-west, as well as vast coal reserves and copper, lead, zinc and gold ore. Smaller deposits exist of iron, silver, chromite, nickel, bismuth and others. Bulgaria has abundant non-metalliferous minerals such as rock-salt, gypsum, kaolin and marble.

The country has a dense network of about 540 rivers, most of them—with the notable exception of the Danube—short and with low water-levels.[9] Most rivers flow through mountainous areas. The longest river located solely in Bulgarian territory, the Iskar, has a length of 368 km (229 mi). Other major rivers include the Struma and the Maritsa River in the south.

The Rila and Pirin mountain ranges feature around 260 glacial lakes; the country also has several large lakes on the Black Sea coast and more than 2,200 dam lakes. Many mineral springs exist, located mainly in the south-western and central parts of the country along the faults between the mountains.

Precipitation in Bulgaria averages about 630 millimetres (24.8 in) per year. In the lowlands rainfall varies between 500 and 800 mm (19.7 and 31.5 in), and in the mountain areas between 1,000 and 1,400 mm (39.4 and 55.1 in) of rain falls per year. Drier areas include Dobrudja and the northern coastal strip, while the higher parts of the Rila, Pirin, Rhodope Mountains, Stara Planina, Osogovska Mountain and Vitosha receive the highest levels of precipitation.

Between 1987 and 1999 Bulgaria consisted of nine provinces (oblasti, singular oblast); since 1999, it has consisted of twenty-eight. All take their names from their respective capital cities:

The provinces subdivide into 264 municipalities.

A view of Business Park Sofia. The capital generates a large portion of the nation's GDP.
A sunflower field in Dobrudja, one of the most fertile regions in Bulgaria

Bulgaria has an industrialised, open free market economy, with a large, moderately advanced private sector and a number of strategic state-owned enterprises. The World Bank classifies it as an "upper-middle-income economy".[53] Bulgaria has experienced rapid economic growth in recent years[update], even though it continues to rank as the lowest-income member state of the EU. According to Eurostat data, Bulgarian PPS GDP per capita stood at 40 per cent of the EU average in 2008.[54] The United States Central Intelligence Agency estimated Bulgarians' GDP per capita at $12,900 in 2008,[55] or about a third that of Belgium.[56] The economy relies primarily on industry and agriculture, although the services sector increasingly contributes to GDP growth. Bulgaria produces a significant amount of manufactures and raw materials such as iron, copper, gold, bismuth, coal, electronics, refined petroleum fuels, vehicle components, weapons and construction materials.

Due to high-profile allegations of corruption, and an apparent lack of willingness to tackle high-level corruption, the European Union has partly frozen EU funds of about ?450 million and may freeze more if Bulgarian authorities do not show solid progress in fighting corruption.[57]

Bulgaria has tamed its inflation since the deep economic crisis in 1996–1997, but latest[update] figures show an increase in the inflation-rate to 12.5% for 2007. Unemployment declined from more than 17% in the mid 1990s to nearly 7% in 2007, but the unemployment-rate in some rural areas continues in high double-digits. Bulgaria's inflation means that the country's adoption of the euro might not take place until the year 2013–2014.[58]

Agricultural output has decreased overall since 1989, but production has grown in recent years[update], and together with related industries like food processing it still plays a key role in the economy. Arable farming predominates over stock breeding. Agricultural equipment amounts to over 150,000 tractors and 10,000 combine harvesters, as well as a large fleet of light aircraft.

Although Bulgaria has relatively few reserves of natural fuels such as oil and gas, it has a very well-developed energy sector which plays a crucial role throughout the Balkans. The country's strategic geographical location makes it a major hub for transit and distribution of oil and natural gas from Russia to Western Europe and to other Balkan states. In terms of electricity production per capita, it ranks fourth in Eastern Europe.

The largest (and only) nuclear power plant operates in the vicinity of Kozloduy, and has a total capacity of 3,760 MW. Construction of a second nuclear power plant has started[update] near Belene with a projected capacity of 2,000 MW. Thermal power plants (TPPs) provide a significant amount of energy, with most of the capacity concentrated in the Maritsa Iztok Complex.

Recent years[update] have seen a steady increase in electricity production from renewable energy sources such as wind and solar power, although it still relies mostly on coal and nuclear powerplants.[61] Due to the abundance of forests and agricultural land, biomass can provide a viable source of electricity. Wind energy has large-scale prospects, with up to 3,400 MW of installed capacity potential.[62] As of 2009[update] Bulgaria operates more than 70 wind turbines with a total capacity of 112.6 MW, and plans to increase their number nearly threefold to reach a total capacity of 300 MW in 2010.[63]
[edit] Industry and mining
Main article: Industry of Bulgaria
"Elatsite" gold and copper mine extracts about 13 million tonnes of ore annually, and produces about 42,000 tonnes of copper, 1.6 tonnes of gold and 5.5 tonnes of silver.[64]

Industry plays a key role in the economy. Although Bulgaria lacks large reserves of oil and gas, it produces significant quantities of minerals, metals and electricity.

Mining, an important source of export earnings, and has become pivotal to the Bulgarian economy. The country ranks as the 19th largest coal producer in the world,[67] 9th largest bismuth producer,[68] 19th largest copper producer,[69] and the 26th largest zinc producer.[70] Ferrous metallurgy also has major importance. Much of the production of steel and pig iron takes place in Kremikovtsi and Pernik, with a third metallurgical base in Debelt. In production of steel and steel products per capita the country heads the Balkans. The largest refineries for lead and zinc operate in Plovdiv (the biggest refinery between Italy and the Ural mountains), Kardzhali and Novi Iskar; for copper in Pirdop and Eliseina (defunct as of 2009[update]); for aluminium in Shumen. In production of many metals per capita, such as zinc and iron, Bulgaria ranks first in Eastern Europe.

About 14% of the total industrial production relates to machine building, and 20% of the people work in this field.[71] Its importance has decreased since 1989.
[edit] Tourism
Main article: Tourism in Bulgaria
A view of Rila mountain

Main destinations include the capital Sofia, coastal resorts like Albena, Sozopol, Golden Sands and Sunny Beach; and winter resorts such as Pamporovo, Chepelare, Borovetz and Bansko. The rural tourist destinations of Arbanasi and Bozhentsi offer well-preserved ethnographic traditions. Other popular attractions include the 10th century Rila Monastery and the 19th century Euxinograd ch?teau. 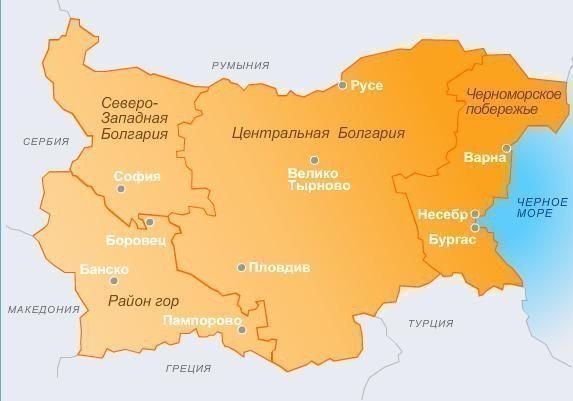