A state in the centre of Europe.  It  borders on Czech republic in the north, in the north-east   — on Slovakia, in the east  — on Hungary, in the south  — on  Slovenia, Italy  and Swiss, in the west — on Lichtenstein, Swiss and Germany.

Austria (German: Osterreich.ogg Osterreich officially the Republic of Austria (German: Republik Osterreich.ogg Republik Osterreich), is a landlocked country of roughly 8.3 million people[2] in Central Europe. It borders both Germany and the Czech Republic to the north, Slovakia and Hungary to the east, Slovenia and Italy to the south, and Switzerland and Liechtenstein to the west. The territory of Austria covers 83,872 square kilometres (32,383 sq mi), and is influenced by a temperate and alpine climate. Austria's terrain is highly mountainous due to the presence of the Alps; only 32% of the country is below 500 metres (1,640 ft), and its highest point is 3,797 metres (12,460 ft).[5] The majority of the population speaks German,[6] which is also the country's official language.[1] Other local official languages are Croatian, Hungarian and Slovene.[5]

The origins of Austria date back to the time of the Roman Empire when a Celtic kingdom was conquered by the Romans in approximately 15 BC, and later became Noricum, a Roman province, in the mid 1st century AD[7]—an area which mostly encloses today's Austria. In 788 AD, the Frankish king Charlemagne conquered the area, and introduced Christianity. More recently, the Austrian Empire formed a monarchic union with the Kingdom of Hungary in 1867—creating Austria–Hungary, also known as the Austro-Hungarian Empire—which ended in 1918 with the closure of World War I. After establishing the First Austrian Republic in 1919 Austria was de facto annexed into Greater Germany by the Nazi regime in the so-called Anschluss in 1938.[8] This lasted until the end of World War II in 1945, after which Austria was occupied by the Allies. In 1955, the Austrian State Treaty re-established Austria as a sovereign state, ending the occupation. In the same year, the Austrian Parliament created the Declaration of Neutrality which declared that the country would become permanently neutral.

Today, Austria is a parliamentary representative democracy comprising nine federal states.[5][9] The capital—and with a population exceeding 1.6 million, Austria's largest city—is Vienna.[5][10] Austria is one of the richest countries in the world, with a nominal per capita GDP of $43,570. The country has developed a high standard of living, and in 2008 was ranked 14th in the world for its Human Development Index. Austria has been a member of the United Nations since 1955,[11] joined the European Union in 1995,[5] and is a founder of the OECD.[12] Austria also signed the Schengen Agreement in 1995,[13] and adopted the European currency, the euro, in 1999.

Austria is a largely mountainous country due to its location in the Alps.[59] The Central Eastern Alps, Northern Limestone Alps and Southern Limestone Alps are all partly in Austria. Of the total area of Austria (84,000 km2 or 32,433 sq mi), only about a quarter can be considered low lying, and only 32% of the country is below 500 metres (1,640 ft). The Alps of western Austria give way somewhat into low lands and plains in the eastern part of the country.

Austria can be divided into five areas, the biggest being the Eastern Alps, which constitute 62% of nation's total area. The Austrian foothills at the base of the Alps and the Carpathians account for around 12% and the foothills in the east and areas surrounding the periphery of the Pannoni low country amount to about 12% of the total landmass. The second greater mountain area (much lower than the Alps) is situated in the north. Known as the Austrian granite plateau, it is located in the central area of the Bohemian Mass, and accounts for 10% of Austria. The Austrian portion of the Vienna basin comprises the remaining 4%.

The greater part of Austria lies in the cool/temperate climate zone in which humid westerly winds predominate. With over half of the country dominated by the Alps, the alpine climate is the predominant one. In the east—in the Pannonian Plain and along the Danube valley—the climate shows continental features with less rain than the alpine areas. Although Austria is cold in the winter, summer temperatures can be relatively warm—reaching temperatures of around 20 – 40 °C.[60]
[edit] Economy
Main article: Economy of Austria
See also: List of Austrian companies
Modern Vienna

Austria is one of the 12 richest countries in the world in terms of GDP (Gross domestic product) per capita,[3] has a well-developed social market economy, and a high standard of living. Until the 1980s, many of Austria's largest industry firms were nationalised; in recent years, however, privatisation has reduced state holdings to a level comparable to other European economies. Labour movements are particularly strong in Austria and have large influence on labour politics. Next to a highly-developed industry, international tourism is the most important part of the national economy.

Germany has historically been the main trading partner of Austria, making it vulnerable to rapid changes in the German economy. However, since Austria became a member state of the European Union it has gained closer ties to other European Union economies, reducing its economic dependence on Germany. In addition, membership in the EU has drawn an influx of foreign investors attracted by Austria's access to the single European market and proximity to the aspiring economies of the European Union. Growth in GDP accelerated in recent years and reached 3.3% in 2006.[61] 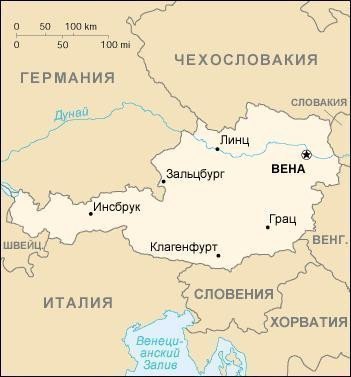