Major fighting died down already! Since ascertain the current economic situation in the country our astrologers. Everything bad that could happen has already happened! Of course, the echoes of past troubles and problems will accompany the next year, but it will be localized and fragmented. This is the general picture of 2011. And now everything and in order.

In 2011 Ukraine will be created very favorable conditions for business. This will involve changes in the law and facilitate the work of small and medium businesses. Also, this will contribute to reducing the tax burden and simplify the relations between the State-business. Investment will gain easier access to our country and access our business to credit within the state and beyond. Possible to predict the fall of interest rates on loans up to a level that meets the needs of business. Can significantly reduce mortgage rates that will revitalize the market of business and residential property. In real estate start to run the program "social housing" and others like it. This on its part will encourage banks and investors will intensify. Real estate prices will continue to decline, which may be differently evaluated in economic terms.

In-bank financial sector to start positive changes in relation to customers. Namely: the banks will attract reliable customers due to "ransom" them from other banks. "Redemption" at the expense of more profitable for the client. But such a policy will lead to another wave of bank failure. The first wave has already started from November 11 and will end on December 22, 2010, the second wave - from 03/03/1911 to 04/24/1911, the third - from 08/02/1911 to 10/09/1911. The most difficult time with the astrological point of view - April!

Probably next year, and quite possibly, in the above mentioned periods will be disclosed financial fraud or adventures of a political nature. Sensational materials will open the eyes of Ukrainians and the international community to the political elite of our country. Most of the above-said will affect previous government and the president.

Incumbent President Victor Yanukovich will continue to reform. In addition to reform the constitution and tax code will be changed and other legislation. According to the astrological indicators in 2011 completes the constitutional and legislative reforms, started by the second President of Ukraine Leonid Kuchma in 1996. It can be assumed that the constitution of Ukraine will bow to the federation. That, in my opinion, more in line with our realities and contribute to efficient management and harmonious development: both economic and cultural. 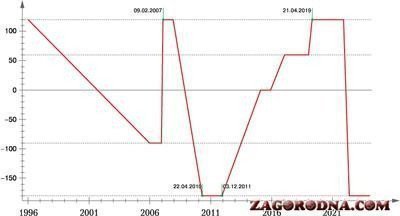 2011 will be remembered as the year of stabilization and out of the crisis. If you look at the chart, you will see that the recovery begins in December 2011. Maximum observed on the chart to 2019. Hopefully, the astrological calculations are confirmed in practice. Schedule, which you can see, was first published in the December issue of All-Ukrainian scientific-popular astrological magazine "The Lunar Calendar for 2002. The article was called "Ukraine 2003 and 20 years later. " While projections in 2002 are met.
Oleg Yevtushenko, https://www.moygoroskop.com/goroskop/ukrprognoz/0006/