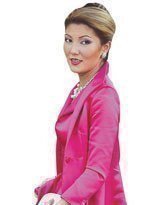 State average Nursultan Nazarbayev's daughter Dinara is estimated at two billion dollars
Average daughter of Kazakh President Nursultan Nazarbayev's 42-year-old Dinara Kulibayev acquired a luxury villa on the shores of Lake Geneva. Pleasure admire the beauty of the Swiss luxury apartments at a cost of $ 72 million.
According to Western media, for the mansion and land area of eight thousand square meters Dinara paid four times as much real value. However, Nazarbayev's daughter is not accustomed to bargain. No wonder Dinara, whose capital is estimated at two billion dollars, is included in the list of most influential people in the world.

By the way, Dinara, on education in drama, is actively involved in charity and is headed by Nazarbayev's Education Foundation, which provides financial support to outstanding students of the country. Kazakh leader's daughter married to one of the most influential and wealthy people of the country Timur Kulibayev. In the couple have two children.

In all, Nursultan Nazarbayev's three daughters, all three in high positions in the country. The eldest, Dariga - right hand his father, politician and businessman, the youngest, Ashiya, - the head of a major construction company.
zagorodna.com
Content tags: Overseas property Property politicians
Did you like the material?