The astrological map of Kiev 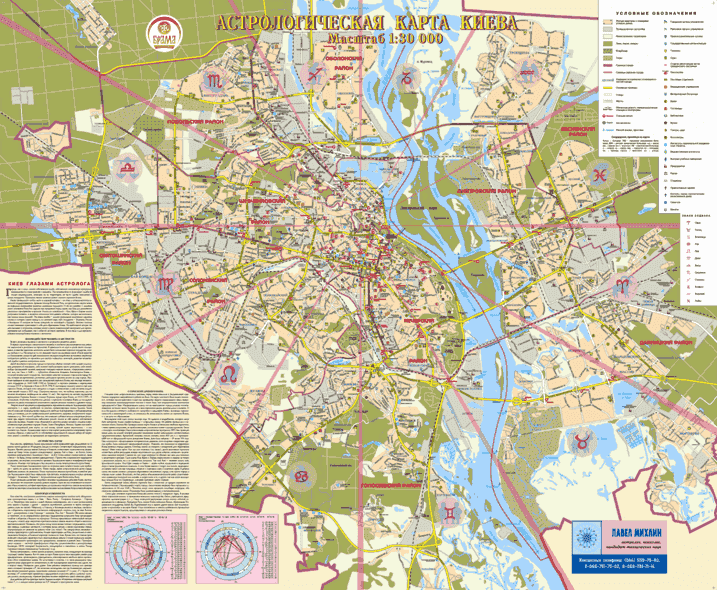 The advantages of this astrological chart can also include the fact that it is the map, rather than circuit city. It is made by specialists-cartographers on the basis of topographic kartoosnovy Kiev. This allows the astrologer to accurately combine the horoscope of the individual with the energy of the city and to assess their impact.

During the time elapsed since the publication of Cards (2004) until it appears on the site, but that's over 5 years, the card not only has not lost its relevance, but also received additional confirmation of its adequacy and usefulness. It reviews and people who have received specific recommendations to the astrologer, associated with the choice of residence, office, etc., it faktazh, which appeared in the process of further work with historical material.

In the course of an astrological school revealed that the card can serve not only as a tool for professional astrological work, but also a vivid illustrative material energy of the city, as well as a very effective training tool for learning the art of astrology.

"STRUCTURE" CARDS
As you know, visually, Zodiac is a perfect circle, divided into 12 equal parts by arcs to 30 degrees, each of which corresponds to a definite sign of the zodiac. The border signs Sagittarius and Capricorn appropriate symbolic direction of the North (the point of the winter solstice), the boundary of Pisces and Aries - East (vernal equinox), Gemini and Cancer - the South (the point of summer solstice), and the Virgin Libra - the West (Point autumnal equinox). Adopting these symbolic directions for real, we are able to bind to the zodiacal circle of the map area. This principle was the basis for the astrological chart of Kiev.

After the orientation of the zodiacal circle around the world remains only one problem - to find its center on the ground. In other words find the astrological center of the city. The problem is complicated, but solvable. After careful analysis of maps of Kiev as the center of the zodiacal circle was determined Detinka mountain, towering in the middle of the tract Potters - Kozhumyaki. Result - The astrological map of Kiev to you.

Below is a sufficiently detailed description of the zodiac regions of Kyiv, as far as possible within this publication. Here we dwell on some general points, which are characteristic for the manifestation of Energy signs on the ground, as well as some potential professional use astrological chart.


SOME FEATURES
As is known in astrology is widely used notion of the axes of uniting the opposition signs, ie, Aries - Libra, Taurus - Scorpio, Gemini - Sagittarius, etc. Energy of these signs on the one hand opposition, just as the location of these signs in Zodiac, on the other - is a partnership, adding those features, which in this sign is not enough. For example, and Sagittarius and Gemini are the trademarks associated with the society, social contacts, information, sports, show, but the sign of Gemini - democratic, but the sign of Sagittarius - Elitar. Or Leo - Aquarius. Both the sign associated with the "take off", but for some reason the traditional astrology Leo attributes "ups" in society, and Aquarius on the airfield. It is therefore of considerable interest to trace the extent to which energy is the total opposite signs, and how the opposite. It turned out that the line between them is very thin and is determined primarily by the terrain, which hit the region, as well as a horoscope of the city, defining its development at this stage (see below). So enterprises associated with river transportation and fishing, more typical of Cancer, Capricorn, housed in the opposition, and the Kiev airport was in Leo. In addition, this fine line allows you to combine the characteristics of the opposition signs and accurately determine the direction of the organization or company caught in the mark. Examples are - Institute of Society Transformation, also located in democratic Gemini Research Institute of Fire Safety, located in a quiet and plump bodies (opposing flammable Scorpio), etc.

Very interesting from the perspective of the astrologer, were areas that fall on the border (the cusp) signs of the zodiac. All of these areas on the map of Kiev simply is saturated with all kinds of enterprises, organizations, institutions belonging to the most glaring manifestations of both the boundary markers. This is natural and understandable, because such a placement company dramatically expands its capabilities through the use of energy as one and the second sign. It is interesting to here more. The coverage of the energy cusp or boundary sign is approximately ± 5 °, which is somewhat surprising, as most modern authors mention another, much smaller value ± 2 ° (and even -2 °). However, this value is ± 5 ° corresponds to the traditional astrology orb (admission) cusps of houses and, apparently, reflects the real impact of the energy of one sign to another.

For the convenience of the border signs of the Zodiac on the map marked sectors of width exactly 1 °, ie, each boundary line at 0,5 ° «is" in the space of the mark.
www.zagorodna.com
Content tags: Kiev interesting facts аstrology еstate
Did you like the material?