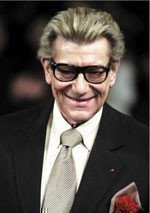 <div style="text-align: justify;"><br /><strong>Castle "Gabriel", owned by French couturier Yves Saint Laurent and his partner Pierre Berge, industrialist, sold out.</strong><br /><br />Laurent and Berge became the owners of the manor in 1983, and after the death of the great couturiers in June 2008, the castle "Gabriel" was put up for sale.<br /><br />Castle area of 800 square meters was built in 1874 and located on the land area of 30 hectares.<br /><br />Original part of the territory is a huge chessboard made up of neatly trimmed bushes, RIA Novosti.<img height="135" width="200" style="margin: 0px 0px 10px 10px; float: right;" alt="Дом Ив Сен-Лорана " src="/files/50/domIvSenLorana103.jpg" /><br /><br /><br />In the castle is situated at a location nearby and luxurious wooden cottage-style, which he loved to build the Russian Tsar Peter I ". However, this structure was excluded from the contract for the purchase.<br />Castle in the north of France in the town Benervil-sur-Mer near Deauville in Normandy, was sold for 9,6 EUR mln in September of 2008, Interfax reports. Sales registered on September 30, 2008, but the first mention in the media about the sale of real estate has appeared only now.<br /><br /><img height="165" width="200" style="margin: 0px 0px 10px 10px; float: right;" alt="Симан Поваренкин" src="/files/50/povarenkin103.jpg" />I bought him a businessman Seaman Povarenkin Russia, said on Thursday the French edition Ouest France. The purchase was carried out on behalf of the company Irina Povarenkin on real estate transactions, "SCI le Château", a shareholder of which is 31-year-old resident of Moscow, Irina Povarenkin, and Luxembourg-based company "Sjato Gabriel SARL", the controlling stake held by Seaman Povarenkin, Chairman of the Board of Directors "Industrial Investors". It said that Povarenkin previously served as chairman of the Board of Directors of the transport group FESCO.<br /><br />The newspaper Ouest-France said that the acquisition of houses in Normandy, the Russians can be considered as a new stage in the elite real estate market of the country. Earlier, Russia's main customers were interested only in real estate on the Cote d'Azur.</div>
Content tags: Overseas property celebrity real estate
Did you like the material?