Sergey Zhukov found an apartment of their dreams 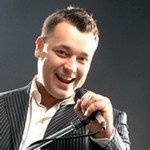