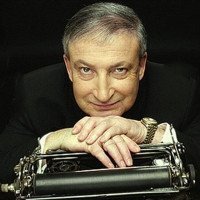 Semen Altos impression of a discreet man, a lot of meet and survived, but still have not given up on life. In the preface to one of his books, he writes: "No one knows for alto ST as well as I, Alto Semen Teodorovic. Before our eyes, he turned from a young author in the old ... He is not making people laugh, and invites them to see for themselves the humor in life around them. "

This is indeed the case, Simon is not seeking Teodorovich continuously witty. But talk to him interesting. Especially if you do not wait until it starts to make people laugh.

Suburban family life Alto began with the construction of a house on ten acres in Kerry Vsevolozhsk district. "It's a different story - says Simon Teodorovic. Then get a piece of land considered for happiness. Around were literally swamp. Under sections gave what was for nothing is not suitable. I remember sitting on a stump, as unknown to the little animals, men with axes and saws, because step aside - and fell into a slush. How much is buried money and years of life! But now there are nice houses, flowers, children run. I remember, the house was a massive oven, which, as a Chinese wall partitioned space, but it heated there for six bricks, others carried the decorative load. Two years later, I accidentally met with stovemaker, and he frankly admitted that our stove was in his first practice. Now he puts great stove! "

Remembering the next episode of Country Life, Alto said: "I can not be called a visionary, practical - is zero. When building a house in Kerry, mainly by Lara (Larisa - wife of humorist), I remembered the word "concrete block, quietly gave money for a car of this same material promised to bring shabashniks. It was the 1991 th year. LECA driven so far ... "

Story had an unexpected sequel. In the author's television program "One Hundred Reasons to Laugh", which is on Sunday on RTR, Alto told the story of the expanded clay. The house on Vasilevsky Island, where he lives, the writer approached the man. "You told the truth on TV, that trusting, good man?" And - asked 50 rubles a month ... Violas gave money: "Obviously, the return together with haydite!"

Few years, Alto had two suburban homes. The second (they enjoy to this day) located in Estonia between Narva and Ust-Narva. The popularity of the resort Ust-Narva acquired in the late 19 th century. "The climate is wonderful, in Jurmala - says Alto." But Jurmala - you like this, the whole show, and Ust-Narva quiet, quiet activity. There are no tall fences with loopholes. Houses and lands on your mind and delight the eye. Clean, neat, with the Baltic taste. There is no desire to outdo his neighbor financial capabilities. "

Near the Gulf of Finland, dunes, pine forest. Rest in Ust-Narva in different years to come Shishkin, Repin, Mamin-Siberian, Tchaikovsky, Mravinsky. And still live there, Alexander Kolker Maria Pakhomenko. Many Russians have gone from this place, where Estonia was the other state. At the border there were many hours of the queue: gasoline prices in Estonia and Russia are very different, and part narvityan earns that go for gasoline in Russia. But all in all is one.

Arrived in Estonia Alto 20 years ago when he was still the Soviet Union, on the recommendation of friends. Altos says he is important to a feeling of cleanliness and order, which has always been in Estonia. "The quality of roads is not discussed. Even in a poor cottage on the window curtains and flowers. Skewed sampling there simply can not be. I do like everything. "Viola suit and a local nature reserve and its neighbors. "Nobody climbs into your soul. He waved his hand in greeting, and sufficient. Every time affects the feeling of space. Evening on the Gulf of Finland, when the sun goes down into the water, the impression that you're in the temple. We often with Bruce (Bruce - Big Royal Poodle) walking in our birch alley, followed by a huge field, and besides us there is no one around. I am not a very sociable, I have enough contact with people from the scene. Lack of human communication - also a luxury. "

The word "problem" when Bruce can not speak aloud. Only when I have already collected things for the transfer of which he is following very closely, it sounds cherished: "Let's go to the cottage!". Poodle soars to the ceiling and rushes headlong down the stairs.

"And what products we have in Estonia! (Words "we" Altos intonational highlights). - Sour cream, milk Ammunition granddaughters to St. Petersburg. And when the cucumbers are Estonian, two pounds can eat without getting up. "

Cottage in Alto unpretentious, old, with facilities on the street, but - thanks to the man who built it - still stands, just a couple of lower beams had to change. On the second floor - a tiny room, the window is moved by birch branches, which grew in the eyes of the writer. Much has been written there. Over time, the house has attached porch, enlarged kitchen. But - "the tramp of a sparrow at night on the roof of a well-heard." In Larisa on the site is growing, no matter what planted - tulips, peonies, daffodils. But the flowers bloom more often than in its absence, and then she listens to stories of neighbors, as it was beautiful.

Now the family is building a new home in the most Ust-Narva. And again, Larisa have to make decisions, and it is not easy. "I am not an adviser - recognized Alto. - I agree with everything, I like everything. And Larissa - a man with a developed taste, and therefore suffers. Building a house - it works: to understand how he will choose the material, color and so on. Have to assume responsibility for the outcome. Larisa - and the superintendent, and engineer, and designer. "Altos do not believe they are lucky with the construction crew of Sergei Kokareva. High quality, integrity and proposed solutions to the customer in plain language.

New home in the Ust-Narva is spacious, with two children, a large living room with a skylight on the section 20 ares. Tragedy for Larisa was an error in the design, which resulted in the lobby, second floor of the column appeared, resembling a pole for a striptease. Hide not carrying the detail. Semen Teodorovich considers that distressed useless - must figure out how to rectify the situation. "In an extreme case, let there be a pole for a striptease! Not everyone can own a house in the permit ... "The yield was found: six made into a lamp. A home construction, which began last fall, to be completed by this fall.

Altos loves fishing, but fishes regularly ... once in 10 years. Pike weighing 3 kilos 400 grams, he caught last year on Lake Ladoga. "Hands to breed in hand does not necessarily have a photo" - says his success Semen Teodorovic.

In previous years - recalls Altos - no such thing as giving his own - and his own apartment - it was not simple. 50 years ago were giving removable, and lived in houses with 8-10 families, the family in each room. Altos still remembers how to fox nose, where the parents rented a dacha, a woman was telling kids scary bedtime stories, as he learned later, the stories of Edgar Allan Poe. Guys dream wildly screaming, and frightened parents could not understand what that attack with their children at night occurs.

"In the Soviet people was simple visuals. Apartments predominantly communal, - said Alto. - At the corner of Zagorodny avenues and streets of Borodino, together with our lived 29 people. We do not know that there are separate apartments. When in third grade called me on the classmate's birthday, I asked him for a long time, who still lives in two rooms, the doors of which were published in the corridor. The boy kept saying: "We!". I then told her that the class learns crazy boy! He argues that in all three rooms they live! For us, it was then: the door - the family, the door - the family! "

In the communal only in one's neighbors was a TV set, a tiny screen is a lens for magnification. In the evening all the neighbors, with their chairs, silently included them in the room, silently placed the chairs, otsmatrivali transfer and as silently disagreed with chairs. Today granddaughters Kate and Vare's impossible to explain, as in the same apartment can live strangers to each other people. "We were so happy that we did not know how much we miss! - Simon said Teodorovic. - And today's young so seductive at the same time around the information that vision must be arranged like a dragonfly. It is not excluded that in the future will have to watch five programs on five television sets at once. "

And he, Simon Teodorovich Altos, living a normal life St. Petersburg intelligentsia. Most of his cabinet took bookcases. He's from the generation that still reads.

And finally, another quote from the preface to his book for alto: "Having lived for so many years, whether he understood anything in life? As a real writer, of course not. However, he boldly shares his reflections that, apart from the reader's laughter, nothing can not cause. "