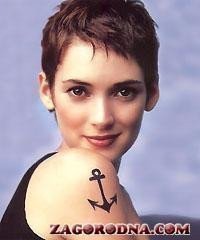 American actress Winona Ryder has exposed on sale mansion in Los Angeles for 4.095 million dollars. Reported by the portal The Real Estalker.

Two-storey house in the Spanish style was built in 1936. Total building area is 350 square meters. It has 4 bedrooms, 4 bathrooms, 2 dining rooms, a gymnasium and a fireplace. The adjacent territory has a barbecue area, garage and pool.

Related article: Nikita Vysotsky and his family was kicked out of a rented mansion?

The actress has acquired a property in March 1998 for 2.6 million dollars. Currently, Ryder also owns a house in the San Francisco area of 320 square meters, which it acquired in 1995 for 1.3 million dollars.

Winona Ryder (real name - Winona Laura Horowitz) was born in 1971. The actress has played in nearly 40 films, including "Beetlejuice," "Edward - Scissorhands," "The Informers", "Autumn in New York." She twice nominated for an Oscar, and in 1993 won a Golden Globe for Best Actress.
www.zagorodna.com