Internet editions of an inventory of property owned by the President of Russia Dmitry Medvedev.
Thus, according to sources, a guarantor of the Constitution has an apartment in St. Petersburg, two apartments in Moscow, as well as the house of Rublovka. By modern standards it is quite modest, especially when it comes to first person in the country. 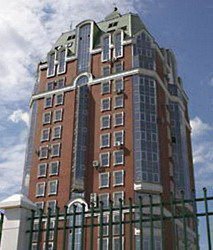 In the capital Medvedev owned apartment in elite residential complex "Golden Keys-1, whose area is about 365 square meters. In the same complex, incidentally, had a previous apartment and the ROC, Patriarch Alexy II.


Also, the president owns an apartment in the building for government

officials "on the street Tikhvin, its area is 175 square meters.

For the most part, the president and his family prefer to live in a house on Rublevke - in the spacious presidential residence Gorki-9. Moreover, Medvedev has a lot of official residences and in other cities of Russia.