At the present time in Ukraine you can meet a variety of names cottage townships. Their names identify important trends. 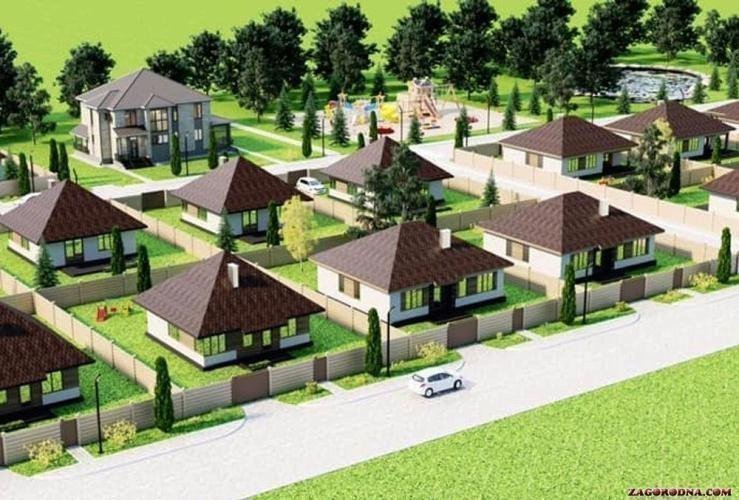 The name of the village, as the person's name, full of meaning and value, so it is important to pick it up properly and with taste.

On behalf of the meet - the quality value
Head of suburban real estate portal www.zagorodna.com Victor Kovalenko argues that to date in developing the names of different properties using four principles.


The leader principle of geo-referencing. This is the best way to tie the name of the village to the historical name of the district.

In second place on the principle of association, which gives rise to the name. As remarked Victor Kovalenko, using names, companies try to influence the customers through "feelings". For example, the name "Olympus" is associated with the gods, status, superiority, the elite. Town "Seventh Heaven" is a rich associative array.

The third principle - the descriptive name. For example, a cottage community "Golden Keys". The key, according to experts, is itself a symbol of the premises, in this case home: describes a secret, which is located behind the door, the keys of which the buyer receives a cottage in the cottage. "The word" gold "in this case, carries a double meaning: first, the gold as an element of prestige, luxury, secondly, in conjunction" golden key "immediately guessed element fabulousness, unprecedented", - added Victor Kovalenko.

The last principle Victor Kovalenko identified as "pro-Western" name. According to this principle to create a name elite settlements Bosco Village, Chateaux Royals, Feofania Residences, RIVERSIDE, Riviera Villas, Villa Roz. According to the expert, using foreign names, companies tend to show the audience that the developer of a foreign company, thereby defining such concepts as quality of technology, the level of execution of works. This provides greater confidence in the audience.

The good name - the key to success
Director of consulting company "RealEkspo" Victor Kovalenko believes that often the names of cottage villages chosen not too successful, and there are doubts that they will take root. "It sometimes happens that the name is so incoherent and uncharacteristic that small towns just beginning to be confused - adds specialist. "It may be noted that when the name of the town are assigned to their location, it sometimes causes confusion.

"Signs" cottage village
One of the determining factors of success for the cottage village is its name, that is a kind of "sign", - says Director of RealEkspo "Victor Kovalenko. "The most important thing in the advertising company's product - to attract the attention of potential customers, including original, memorable, but not shocking public opinion in the name of" - emphasizes the expert.
All summer community somehow always called. In the 20-30-ies DSC often were called "Academic", "Soviet writer", "Polarnik" - often talked about who lives here. Later started chanting nature - "Rainbow", "Sunny". "We have cottage settlements are called differently, often also something natural -" Pines "," Riviera "- the specialist said. This is very important. It's no secret that in the Kiev region there are lots of places with discordant names.

According to Victor Kovalenko, cottage village elite class must also have its own name. "And the name should contain the basic positioning of the village, some key messages that set him apart from the masses and not just be consistent with the name of the area where the village is located, - the expert emphasizes. "It is not very convenient to navigate in" Sauvignon-1 "," Sauvignon-2 "," Sauvignon-4. It only confuses potential customers ", - adds the expert.

According to Victor Kovalenko, the names of the villages could well be in tune with the names of nearby communities. No less interesting trend in the names of modern towns and business elite classes is the attempt to come up with beautiful, fine-sounding phrases. Certain customers are attracted playful, sometimes even funny name.

Concept of the names cottage village is made up of six basic parameters:
1. Determine the potential buyer.
2. It creates emotional and associative array.
3. Defined area construction site.
4. Tsennoobrazovanie.
5. The final positioning of the object construction.
6. It creates a legend.

Browse titles cottage villages in Ukraine
According to the company RealEkspo "as of August 10, 2010 in the portal www.zagorodna.com contains 563 of the town, of which 79 cottage grodkov (14.03%) have no name. Imagine how difficult it will promote such small towns and even harder to sell them.
In the cottage without a name (of 79) 32 town had to Kiev and the region, which is 40.5%, 15 townships (18.98%) in the Crimea and 11 townships (13.92%) in the Odessa region.
According to the head of the portal www.zagorodna.com Victor Kovalenko, the 484 cottage settlements of Ukraine (85.96%) is the name. And in this review for the first time in Ukraine "RealEkspo" reviewed all the names of cottage villages in Ukraine.
In Kyiv city and region has 250 cottage settlements with an assigned name that sotavlyaet 51.65%, followed by cottage settlements of the Crimea - just 72 town with the name (14.87%), third in 1963 with the name of the village in Odessa Oblast (13.01%).
Of the 484 cottage villages of Ukraine to the names, in 52 villages (10.74%) the names are written in Latin letters. Some of the names of their own firms: Amstar Europe, Ukrland. Others, like "Park House" (Boryspil district) and Park House (Odessa) names are identical. It is noted in the names of 10 towns in camp from the word Land: (Mirland, Ukrland, New Land, Happy Land, Dream Land).

Help: Naming (from the English. Naming - «establishment name") - the process of creating unique names for the company, product or service. This is the primary, one of the most important and difficult tasks when creating a brand. Getting your goods in the shop, coming to your company, coming to your site, users will always remember your name. It is present in all corporate materials, advertising, in everyday communication, ie used much more frequently than the other elements of the sign system brand.

Viktor Kovalenko
© Protected by the Law "On Copyright". Required an active link to this resource.
www.zagorodna.com/en

Subscribe to our newsletter
Back to top
Your comments:
Your opinion will be the first. Thank you for reading this article. I wish you happiness! Please share your opinion in the comment below.
How to properly and profitably invest in the cottage?
more
New formats cottage villages in the suburbs of Kiev
more
Best cottage towns of Ukraine are named