Named the most influential people of Kiev real estate 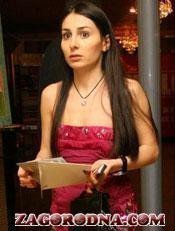 "Focus" magazine gave the top 100 of the first of the capital, on the basis of which is composed rating: "The most influential people in the real estate of Kiev," said SV Development. It should be noted that this rating includes only those people who get up to Ukraine's independence to make a career in Kiev, or else born in the capital. So:

1. (23 place in the "Focus") Kristina Zhitomirskiy, who heads the municipal enterprise "The best house" for the content of the aged. Recall that in presenting his project to create "a better home," Chernovetsky said the Kiev lonely elderly people often suffer from the bandits who want to seize their property, ie flats. According to the mayor, the elderly forced to take up residence in a nursing home and, thus freeing their apartment. And the mayor initiated the decision suggests that the elderly reside in their homes KP "best house", and their apartment lease, but they remain the property of people.

Related article: For the Prince of the Netherlands built a villa in Argentina

3. (27 place in the "Focus") Alex Yevlakh, head of the standing commission on land tenure and urban development in the COALITION.

5. (64 place in the "Focus"), Vladimir Polyachenko, MP (OU-PSD), honorary president of the company "Kyivmiskbud." Devote themselves to the construction Vladimir Polyachenko decided in his youth, entered the Kiev Civil Engineering Institute. Started his career as a wizard, he grew up to the post of director of the plant manager and the trust "Strojdetal." Since 1992, headed the construction holding "Kyivmiskbud" and became a people's deputy from the OU-PSD, Honored Builder of Ukraine has been able to defend the interests of the company in parliament.

6. (80 place in the "Focus") Leo Parzhaladze, Chairman of the Board of Directors of ZAO "Company" XXI Century. "Basic Profile" company "XXI Century" - the creation and development of projects in commercial, office, hotel, logistics and residential real estate, as well as management.

As previously wrote the portal "100m2", in early September 2008-the first against the backdrop of the global financial crisis, the company said Parzhaladze that reduces administrative costs, investments are limited and partially reduces the number of staff.

7. (85 place in the "Focus") Vasily Antonov, head of the Board of "SWC Obolonzhitlobud. Company SWC Obolon Kievans known as the founder of the complex construction of luxury housing Obolon. Founded company in 1988 and today the company employs more than 1 thousand people. Under the leadership of company president, Honored Builder Vasyl Antonov company has built about 300 thousand square meters of housing, including social facilities.

8. (86 place in the "Focus"), Sergei Samusev, president of the corporation "Golden Gate". Corporation "Golden Gate" was created in 1989 as an association of cooperatives, but only in 2005, reformed in a corporation, that combines more than 10 enterprises operating in such areas as construction, reconstruction and repair of roads, bridges, airports, manufacturing road-building materials, building structures, granite gravel, construction of cottage settlements, housing and office complexes, project management and general contracting

9. (91 place in the "Focus"), Vladimir Trofimenko, chairman of the Supervisory Board of "NEST". Company "Nest" for more than 10 years working in the capital market, real estate and development. Its portfolio consists of projects of residential, commercial and office real estate. More recently, "Nest" is engaged in the implementation of Ukraine's first multifunctional complex, which would include housing, office space, hotel and shopping center component.

10. (92 place in the "Focus") Valentin Isak, president of the building corporation "Capital". Investment and construction company "Capital" was established in 2003 and unites 26 independent organizations that can perform complex operations, from design to delivery of apartments to the investor. Corporation is the main developer of an array Obolon, which could realize the idea of a complex building with a single architectural ensemble and infrastructure, for which in 2003 was awarded the State Prize. President of the Corporation is the popular architect of Ukraine Valentin Isak.
zagorodna.com
Content tags: Property Residential Real Estate Property politicians
Did you like the material?