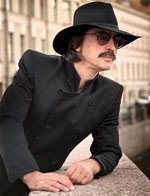 The famous actor Mikhail Boyarsky going to go away from Russia in sunny Bulgaria, where he recently purchased townhouse.

Related article: Elton John will move into a new house in California

Popularly known and beloved film and theater actor, author, singer and socio-political figure Mikhail Boyarsky hopes that the new foreign mansion will become a place of rest and reunion of all his stellar extended family.

Recently Boyarsky rarely spend time with his wife, stage actress Larisa Luppian, and their children - his daughter Lisa Boyars, a talented young actress who went on an acting dynasty Boyarsky, son and businessman, Sergei, recently released his first solo album as a writer-performer.

Boyarsky is a tight tour schedule, busy in the theater, on television, in the political arena, participating in a stellar team acting on a favorite sport - football. Mikhail Sergeyevich virtually no time for rest and communion with his beloved family. Now he hopes that the outside of Russia he will finally manage to gather all the family at home.

As neighbors, then at the nearby 40 thousand square meters of celebrities until no more. Last year, the shelter in a nearby housing complex purchased Hope Babkin, Philip Kirkorov and Lolita Miliavskaya.

The resort village of Orange County is located in the unique environment, less than two kilometers above the resort of Sunny Beach and Sveti Vlas, which are deservedly popular among tourists from all over the world.
Content tags: Overseas property celebrity real estate
Did you like the material?