Market town real estate - 2010: results and way out of crisis 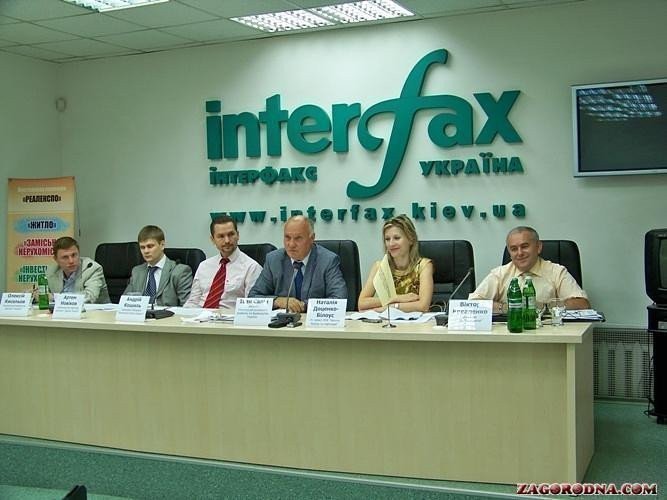 Director of the company "RealEkspo" Victor Kovalenko presented the company and its services, introduced a new information-analytical portal of country and overseas real estate www.zagorodna.com 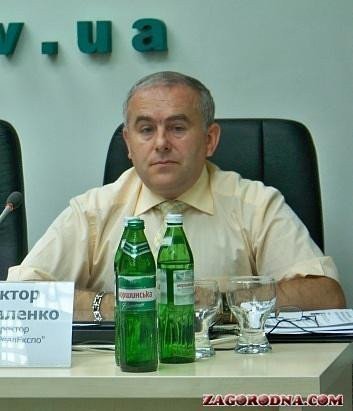 In its report on the topic: "Housing estates in Ukraine: results of the first half of 2010" Victor Kovalenko described the current situation, made a market analysis and development forecasts made cottage settlements of Ukraine, Kiev and Kiev region.

Related article: Market rent cottages in the Kharkov region is not developed

Victor Kovalenko said, "As of 30.06.2010 in the portal www.zagorodna.com 564 cottage town: 175 built, being built 221 and 168 projected.
Compared with December 2009, the market turned out 25 new towns.
By number of cottage townships championship in Kiev and area (279 villages), the second place with 93 towns in the Crimea in third place in the Odessa region of 76 towns.
Leader of the average cost of 1 square meter is the Crimea (2248 dollars), second only to Kyiv (2185 dollars), third place at the Odessa region (1526 dollars).
Compared with the beginning of 2010 the average cost of 1 square. m in Ukraine decreased from 1121 to 1089 dollars.
The cheapest town in Ukraine, with the cost of $ 220 per square meter is the project cottage settlement "Lana Polesie" in Rivne region, and the most expensive town "Black Sea" in the Crimea with the cost of 19500doll/kv.m.

Victor Kovalenko said: "As of June 30, 2010 in the portal www.zagorodna.com there were 258 cottage villages in the Kiev region and 21 of the town in Kiev (a total of 279 towns). This is a 1996 built towns, 92 and 91 under construction projected town.
As of January 1, 2010 in the portal were 269 towns. For six months, the market in the Kiev region came 10 new projects, an increase of 3.71%.
Superiority of the number of towns in the Kyiv-Svyatoshinskiy district (62 town), in second place - Obukhov district with 58 towns, the third place in the Makarov Area, from 36 towns.
Of the 183 planned and built towns at the June 2010 construction of the "frozen" in the 80 towns, representing 43.71% of the total number under construction and planned towns.
In comparison with the beginning of the year, in 6 towns construction "unfreeze", which is 4,9%.
In terms of the frozen objects in the Makarov District championship with 18 towns, second place in Kyiv Svyatoshinskiy district (16 villages) and third place in Brovarsky area (11 "frozen" towns).
As at 30 June 2010 the average cost of 1 sq. m in the cottage of the Kiev region is equal to 1,330 dollars. Compared with the average cost of 1,460 dollars per 1 square meter in January 2010 decline of 8.91%.
Championship at an average cost of the "square" at the Obukhov district -1,903 dollars, and finishes Baryshevsky district with the cost of the "square" 700 dollars.

According to Victor Kovalenko, "Increasing the number of towns, the unfreezing of some objects indicate the resumption of suburban real estate market and exit from the crisis."
Director of consulting company "RealEkspo Victor Kovalenko predicted to slow further fall in the value of built cottage towns Kiev region, and even a slight increase and the continued fall in storyaschihsya cottage towns at the level of 2-8% before the end of the year. 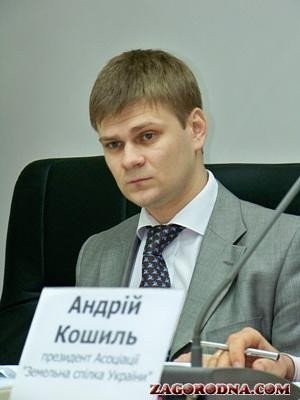 Artem Novikov, Managing Partner, Dialog Classic "in the report on the topic:
"Future development of the suburban market of new buildings-2010: problems, prospects, promotion, described the situation on the market of suburban new construction, outlined the prospects of this segment of the suburban real estate.
The level of demand from the pre-crisis level of 10% -15%. The main reasons: no running programs mortgage at competitive rates for potential buyers, lower income levels, the crisis of confidence
to the developers.
Principal transactions: a secondary market and put into operation prime real estate, there is interest in finding and acquiring secured apartments at below market prices.
Today buyers are people who have savings
and acquire property or to improve their housing conditions in the future, or want to keep the accumulated funds in the national currency, investing in real estate for subsequent lease.
As of mid-2010 began to play a role and a psychological factor - many are aware that a substantial reduction in prices in the future will not be. The result - an interest in one-and two-bedroom apartment in well built houses began to gradually resume. 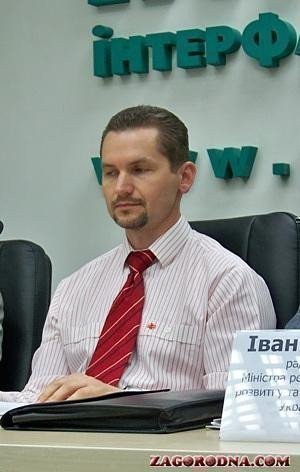 Andrew Koshil, president of the Association of Land Union of Ukraine "in the report on the topic:" Land Market: Issues and Trends "described the situation in the land market in Ukraine.
"The land market is closely linked to the suburban real estate market. This is the basis, the pricing component, a factor that affects the security of investments and liquidity facilities.
However, today, interest in buying land, investing in land is seriously reduced. Moreover, land market shows the lowest decline among all segments of the real estate market. The reason for this situation - hidden and obvious problems of the land market, in particular, and land relations, in general, - said Andrei G..

The main problem - the absence of a clear, understandable all the same public policy in the sphere of land relations and ineffective controls over the use of land resources. The investigation - a vast and very complicated legislation, which, moreover, is not met, withdrawal from the industry professionals, permanent restructuring of the State Committee, ultraboundary level of corruption, both within the State Committee and other bodies related to the release and clearance of land. In 2008 - 2009 years for the Exploration of Millennium Challenge Corporation, almost twice of corruption has grown in obtaining documents permissive nature of the operations with the land. 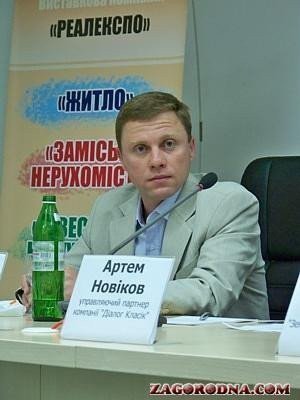 Alexei Kiselyov, general director of the Kansas "in the report entitled" The secondary market of country real estate: Analysis and Forecasts "said that in cities there is no satellite market activity, the average cost of apartments from 800 to 1100 USD per sq.m. Present edenichnye sale. The sale of the apartments in some cases reaches 20%.
According to Kiselyov, now in demand at home from 100 to 200 square meters, but sales weak
Cost varies depending on the direction of 1100 dollars per square meters. average (Zhitomir, Brovarske, Boryspil, Bucha).
Obukhov and Vyshgorod directions expensive (an average of 2,000 dollars per square meters). More demand for houses from 150 to 350 square meters. 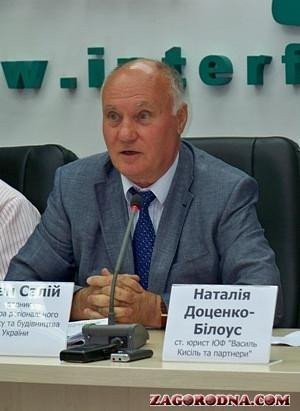 Ivan Saliy advisor to the Minister of Regional Development and Construction of Ukraine in the report entitled "Development of an individual, a cottage and low-rise building in Ukraine highlighted the realities of the construction market of Ukraine and the need to resume the individual and low-rise construction.
Construction sector in Ukraine is still looking for post-crisis development model. Builders until the past problems of shadow processes, loans and idle construction sites (on 1 January 2010 12.1 ths (63,8%) of construction projects suspended or inhibited.
The state and the market has not yet been able to offer an efficient, effective, moral and transparent model of a healthy public-private partnership. For 5 months 2010 the volume of construction work decreased by 20% compared to 5 months of 2009, and to the same period in 2008 the fall is over 60%.
There are good signals: the beginning of the financing from the State budget, active government and Ministry of Regional Development, and Construction of Ukraine.
A major focus of the revival of construction industry in Ukraine is the intensification of the mass of individual cottage development and low-rise building, which has the following advantages:
- Significantly cheaper than the construction and operation;
- Smaller of material;
- Short construction;
- Investor, often he is also a developer, protected from fraud;
- The owner of a recreational land in the service;
- Extensive use of local building materials;
- Simplified application of energy-saving and environmentally friendly technologies. 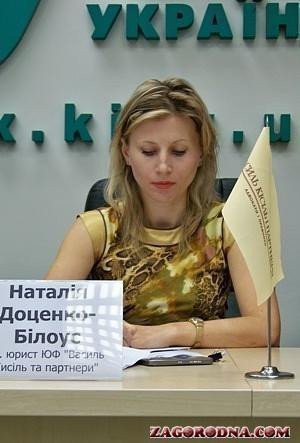 Natalia Dotsenko-Belous, Art. Lawyer Law Firm "Vasil Kisil and Partners" in his speech at the press conference spoke about the legislation in the country real estate.
If the "cottage" as a generalized concept of a number of legal phenomena is the place to be, then the cottage settlements, despite the increasing demand on them, remain outside the legal field. That is again a situation where the development of relations in the sphere of construction and investment houses ahead of the current legislation.
Today, cottage settlement - is a set of individual houses garden, residential and other buildings.
Legal uncertainty in relation to the cottage settlements led to a situation where questions of construction of cottage settlements and attract investment in these projects are solved by each of the developers is chaotic.
Before the developer, agreed to implement the construction of cottage settlements, pervooocherednymi legal challenges are:
a) determine in what part of the construction of houses is permitted;
b) develop a scheme of selling the cottage (with or without the sale of land);
c) to exclude cases of failure buyers who purchased land from the cottages;
g) ensure the right to operate a cottage town.

Subscribe to our newsletter
Back to top
Your comments:
Your opinion will be the first. Thank you for reading this article. I wish you happiness! Please share your opinion in the comment below.
Major improvements to help sell a house
more
The greatest demand among tenants are home within Kiev
more
How to choose a vacation home?
more
Own house in the country - a prestigious
more
What holiday homes buyers prefer?
more
Sign
Registration   Forgot password