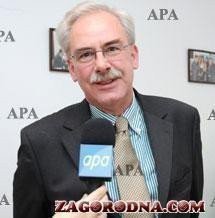 <div style="text-align: justify;">   Netherlands Parliament decided to sell the facility to reduce public spending.<br />The residence is located in Cape Town. It includes five bedrooms, four bathrooms, a room for receptions, a large dining room, library, cloakroom and some auxiliary rooms. It also has three garages and swimming pool. Total area of 975 sq.. m, and adjacent land - 1.6 hectares, said Realestateweb.<br /><br />The facility was built in 1952, and 14 years later it acquired the Government of the Netherlands. The residence was used for placement of the ambassador and other diplomats during their working visits to Cape Town. We note that the Embassy of the Netherlands itself, as well as diplomatic missions of other countries, is located in the administrative capital of South Africa in Pretoria.<br /><br />The residence will be sold at auction to be held on December 10. The initial value of the lot is not specified.<br /><br /><strong> Prian.ru </strong><br /> <br /> </div>
Content tags: Overseas property Property politicians
Did you like the material?