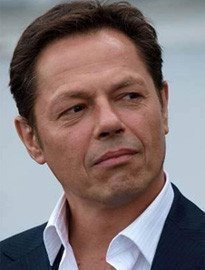 June 1, 1995. This date is known actor Igor Sklar calls with solemnity. That day was the beginning of building a cottage in Pavlovsk, after 8 years of becoming an actor and his family house in which he is happy.

Today the family Igor B. - wife, Natalya Akimova, the son of Basil and the two charming fees - already live in a house built in Zarechnoe of Pavlovsk. "I'm in St. Petersburg is not a lot of favorite places, - says the actor - is - one of them. In previous years, loved the weekend or take a trip to the Baltics, or here, in Pushkin, Pavlovsk. Landscape Pavlovsk park of such beauty that I have not seen anywhere else in the world, and I've seen both Europe and Asia. Later, when he was born Vasily, every summer we were shooting in these places cottage. "

The idea to move out of the city arose spontaneously. The fate of the actor, as he himself admits, there were many accidents that turned the lives of 60, 120 or even 240 degrees. This randomness - from the category of pleasant. In 1994, Sklar was a cocktail party at the table with the then mayor of St. Petersburg, Anatoly Sobchak. II celebrated the end of the Festival of Festivals (the largest non-competitive display of the best works of world and national cinema in recent years, been held since 1993) in which the actor was present as the winner of the prize "Kinotavr" for best actor in the film "Year of the Dog" (in this movie Seeds Aranovich , awarded the Silver Bear at Berlin Festival, Sklar played the role of convict Sergei Kozhin). Then Igor Borisovich with his wife and three year son lived in a two-bedroom apartment on Robespierre. Son grew up, became a cramped apartment. "And then I plucked up courage and asked Sobchak, could not we somehow extend the living space, improve what is called living conditions." But in those years, special funds have not been, and in a new apartment Sklar was denied. But as an alternative was offered a plot of land.

The mayor was a man of words and deeds, and a week later the actor got a call from the Board, first city, then the Pushkin as Sklar expressed a desire to live in the vicinity of Pushkin and Pavlovsk. As a result of negotiations with officials, he finally got a swampy, scrubby land partially occupied by the potato patch. "When I first came here, I was sour" - recognized master of the house, comfortably ensconced in a soft swing and enjoy looking well-groomed flower beds, paved multi-colored stone paths, decorative pond surrounding the exotic trees. "It's all here now is fragrant and pleasing to the eye, and the 95 th to the future site of the manor could not even drive up construction machinery, especially the construction site filled forty cars broken bricks and coarse gravel. Only then drove off valve and removed the first bucket of earth under the foundation. "Paying homage to tradition, Igor B., his wife and son was thrown into the base of the foundation of ancient silver coins. To house was long and hard.

It seems that he will stand for centuries - a handsome cottage, for a single house, wherewith now closely built up districts, not like: a solid rock bottom, aestheticism wooden top, a sort of "Russian fantasy on the theme of Alpine chalets. So he calls himself an actor, recalling the history of architectural design. "Somehow happy coincidence that helped acquaintance with the famous Austrian actor Klaus Maria Brandauer,. With him, I met on the set of Yevgeny Yevtushenko "Kindergarten." Some time later I was on tour in Salzburg and accidentally met with Klaus. He invited me to visit in their Alpine chalet. I was totally fascinated by the house and even bought and brought with him to St. Petersburg a few directories on the real estate, one of which was photos of a very similar structure. "

In those days in St. Petersburg and its suburbs have already begun a construction boom. At Igor Sklyarov came familiarity with builders and architects, and some of them "read" the magazine with the desired pictures. Draw a "Russian fantasies alpine chalet" had itself from memory. Were identified approximate size of the house, and then - design was carried out "along the way." Emerged with large terraces, sloping mansard roof with overhangs, shutters on the windows. The first floor has become a single space, united the dining room, living room with fireplace and entrance area. The second - the attic - floor there personal spaces: bedrooms, office, bathroom. Later, there were pavilions on the site, was designed by the landscape space. By the way, is drawing an actor since childhood. "I - recognized - all interesting - and paint, and greeting opus for friends to write, and execute them himself, and horseback ride." (Igor Sklar military service took place in 1980-1982. In a cavalry regiment at Mosfilm) However, the most difficult thing was not to come up with a cottage, and find voplotiteley their ideas.

Construction did not cease even in the 98-m, at the time of default, and all their spouses earned money invested in building materials, machinery, went to pay contractors. Very much has been done (and still do) with their own hands. When arranged lawns, read a lot of literature, he came up with a remedy for moles, izryvshih whole district - a small propeller, combined with a weather vane, placed on a pole, dug in the ground. The propeller creates a vibration that these animals, it appears, can not tolerate. The fence around the house, Igor Borisovich also erected their own, and his wife broke the flower. "Natalya Akimova, Honored Artist of Russia, the USSR State Prize laureate for his role in the play AMDT" Brothers and Sisters ", prize winner Evgeny Lebedev, and just a great actress of the Maly Drama Theatre, she cares for a garden" - not without pride, states the actor. Assisted and co-creative workshop: so, Pavel Lobkov as part of its TV program "Plant Life" framed rare plants in Russia, a small pond.

Nature gratefully respond to courtship: a small garden around the house fruit plum, raspberry, apple trees of different varieties. The fruits of last year, Sklar baskets drove to the theater - has been fruitful year for apples.

And to live in their own house more interesting, healthier and more natural than in the metropolis, he says. There is no way to be lazy, out of town people are always busy with something. Pin, to plant, harvest, to clear the snow. "Life in the house takes an entirely different content. And, having survived a heart attack and three operations on his heart, I did become much look the other way. Felt sorry for the time on nonsense. Want to do things. "This is the case, and creativity. Sklyar have often refuse roles, particularly "cinematic." To the question on what basis he selects them, says: "By the principle of human content. I accidentally brought up on good stuff. In our house there was no tales, but have all the volumes of the book series "Classics of world literature, and in the 13 years I've been reading" Daphnis and Chloe "Long," The Golden Ass "Apuleius, Maupassant and Zola. And now prefer Dostoevsky, Bulgakov, Knut Hamsun, Shukshin Marquez and Begbeder (the list goes on) that offered in a variety of reading now. As for the scenarios of modern TV series - well, if the 12-15 scenario, which I send every year, there is one that can at least read up to the end where the registered person and human life. But everything else - it's not about the people, in any case, I have not seen such. Such foolish, such perfidious such senseless, pathetic thinking and bad speakers. Thank God, I have a theater in which I earn a living, while enjoying the process (language does not turn to call it work) and take part in the bad soap operas, or settle for shabby theatrical role of shame and the time and health. "

And why two seasons ago, Igor B. left the MDT, which has worked (and successfully!) More than two decades, he replies evasively: "Time is changing, theater changes, people change, and these changes to realize the value of life, including including their own. Do not want to spend it for the sake of other people's dreams, desires and aspirations. "

But will the son of Basil, who is now 16 years old, his father's footsteps, until the matter. He plays music with his friends in his own studio, equipped in the attic of the house, and is preparing to enter the Faculty of Philosophy and Political Science "great" university with specialization bibliistika and Hebraic. And is not going to leave the family home and change it to the city. Of course, Igor Borisovich want to see his great grandson ever said: "This house is still my great-grandfather built!"

In the meantime, Sklar happy every day, lived in the alpine chalets Russian. The fact that every day can meet the sunrise, standing on the terrace, while the dew is still wet. The fact that in the nearby village has a cow, from which every week they bring dairy products. Besides, it's time to "go to war with oduvanami and feed the dogs. Two dachshunds, Duck and Thiel, raised a loud barking at the sight of others that have appeared in the house. But quickly soothed by a familiar unhurried speech host. He proudly tells of their mind, a good pedigree and awards, as well as the remarkable talents of hunting.

"I am an incorrigible optimist - he says, simply: it's time to gather in a theater. - Man is happy if he is well wherever he is. Without excessive pathos and false modesty I can say that I am here ho-ro-sho. "

Subscribe to our newsletter
Back to top
Your comments:
20.10.2016 21:41:15 - denis
простите за навязчивость хотел бы . с вашего разрешения пообщаться с вами
What star property can you rent
more
Where does Alexander Buynov live?