Garry Kasparov has bought a penthouse in New York 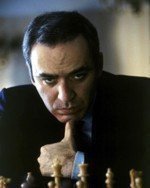 <div style="text-align: justify;">Former world chess champion and now an opposition politician, bought apartments cost $ 3.4 million<br />Purchased Kasparov apartments are located in the Upper West Side, near Central Park. Construction area is 167 square. m, number of rooms is not specified.<br /><br />The New York Times reported that a purchase was taken by a mortgage of $ 1.25 million is also known that the transaction value was $ 350 thousand less than the requested value of the apartments.<br /><br />In late October, Mr. Kasparov has sold for $ 630 thousand other New York apartment, which he bought in 2005 for $ 320 thousand<br /><br />Kimovich Garry Kasparov (real name Weinstein) - famous Soviet and Russia's chess player, writer and politician. From 1985 to 2000 had the title of world chess champion. He is currently leading a number of political and social organizations that declare its opposition to Russia's current government.<br /><strong>Prian.ru </strong><br /> <br /> </div>
Content tags: Overseas property celebrity real estate
Did you like the material?