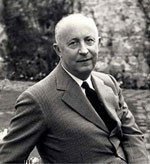 Castle Christian Dior on Azure coast of France may be for sale.
The building of the nineteenth century couturier spent the last few years. According to the French Realtors, the castle has more than 30 rooms and is located in the south of France near Cannes. The current owner, the price and because the sale is not reported. However, the agency sales representatives do not hide that the lock may be the most expensive real estate object of the number sold in France for the past 10 years.

Dior has acquired a residence in 1950 and since then outstanding designer lived in the castle. It was here, away from the daily hustle and bustle, the great French designer created, fantasies, creating masterpieces. His creative life is closely intertwined with the history of this house.

Related article: The leader of the group «DDT» wants to live in Kiev


The interior of the castle has kept the magical aura of the wizard. The atmosphere of the residence attracts and inspires. Every detail has been carefully designed by the master to create a special

comfort. It is here, within these walls, were the last years of life of the great couturiers.

Dior was born 21 January 1905. GRANVILLE - bustling port town on the coast of Normandy. He was the second child of five children of a wealthy merchant of chemical fertilizers. At the insistence of parents Dior preparing for a diplomatic career, but later chose the fashion industry, recalls RIA Novosti. Instead of training on international law and geography of the future couturier spent time in museums, studied musical composition and painting. As a result, Christian Dior and his friend Jean Bonzhak in 1928 opened an art gallery, displaying works by Derain, Matisse, Braque, Picasso.

But happiness was not destined to last forever. During the economic crisis, the father Dior, financed the gallery, went bankrupt, and the company had to close. After much turmoil only after 7 years of Christian Dior returned to the artistic world. On the advice of friends he prepares drawings for the French fashion magazines and is quickly gaining popularity.

In 1931, the designer started selling his first sketches of clothing and headgear, and in 1941 started to work in a certain model home Lucien Lelong in Paris.

In 1942, Dior created a perfume laboratory, grew into a firm Christian Dior Perfume.

After the war, in 1946, with financial support of the textile manufacturer Marcel Boussac designer opened his own fashion house. In 1947, Dior Haute Couture was given an Oscar. This high distinction is still awarded to those who have made fundamental advances in their profession. In 1950, the fashion designer was awarded the Order of the Legion of Honor.
Dior died at Montecatini Terme in Italy, 24 October 1957 at age 52 from a heart attack. It is the family home in Granville at the present time there is a museum.
Content tags: Overseas property celebrity real estate
Did you like the material?