According to all the astrological canons, the city just blended into the zodiacal circle. However, the feeling of completion of work was not. On the terrain map were visible "spikes" that can not be interpreted only as a manifestation of the energy of the zodiacal sign, such as the emergence of the railway station in Leo, or the concentration of chemical plants in Aries. This leads to the idea that the "appearance" of the city should "print out" not only signs of the zodiac, but the entire horoscope as a whole, including the house and the planet. And if it was possible to correlate features of buildings and landscape of Kiev with the influence of horoscopic and planetary grid, then it would be possible to enter the horoscope of Kiev, ie, the date of its formation.

The embodiment of that idea took away a half years. Without going into details that may be of interest only to professionals - Astrologers say that the work was carried out in several stages. Initially, an analysis of maps of Kiev and is most likely, from the viewpoint of astrology, but approximate, the position of planets and houses of a horoscope. Then, using the computer (was used astrological program ZET) looked for the date on which the real time position of the planets most consistent conjectural. Time interval search was about 800 years, ie about ± 400 years from the official "birth date" of Kiev. Date was found - June 19, 556 years. It is consistent with the official historical data, although obtained by a completely different way. This raises a logical question. It is known that the settlements in the territory of Kyiv emerged much earlier. So can we talk about the specific date of education of the city? The answer is very simple. As we have already noted (see above), the date of inclusion of the horoscope can be any ritual, military, political or other developments relating to the inclusion of mass energies. Slavs as people living on the custom, all of its business starts and ends in the ritual. Sami names Kiya, cheek and Horeb mifologemny and deal not only with real people, but also with the Slavic ritual. Thus the name McDermott - means hammer, cue, a phallic symbol. Name Cheeks associated with Serpent - the king of the depths, underground and underwater world and also a phallic symbol. And the name Horeb associated with "Horo" or "bell" that are the root of words such as "round", "wheel" and having a sense of a solar disk. In this case, these names are connected with the ritual of Education (inclusion) of the city, and not just the city, and the "city of power" of the Slavs. Perhaps it was the ritual of combining several previously existing settlements or the Slavic tribes, and most likely to do both, because then followed by trips Kiya "Zur Tsaryugradu" which "ratovashe many countries".

Then, found in such a way, horoscope was accurate to a degree moved to astrological (Zodiac) map of the city. A similar operation was done with a horoscope of 14 May 1648. Readers can ssami perform such an operation, two horoscope given below. The results were surprising and impressive. 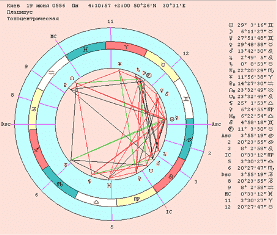 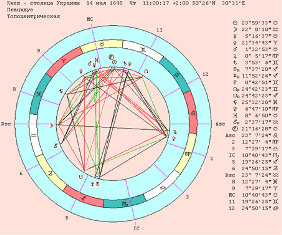 Netting two main horoscopes Kiev exactly (!) "Covered" the city. In the nodal points horoscopes come and fit the Ministry, banks, institutions, enterprises, administration, etc. It has become apparent internal logic of many events today and the past. The Baptism of Russia, the capture of Kiev troops of Batu, the formation of the Ukrainian state, Babi Yar, Kurenivsky Farming and much more was confirmed in horoscopes and map of Kiev. Began to understand many peculiarities of Energy signs of the zodiac, represented in the description of the regions of Kiev
https://psyhologia.com.ua
Content tags: Kiev interesting facts аstrology еstate
Did you like the material?