The primary market of housing in the suburbs of Ukraine Reborn

Consulting Company RealEkspo "(Kiev) as at 10.28.1910 has monitored 360 new buildings in the suburbs of Ukraine's 17 regions. Compared with the beginning of 2010, the number of suburban newly increased by 24 buildings.

Third place in the Lviv region - 18 new buildings (excluding the city of Lviv) (in the beginning of the year -14). 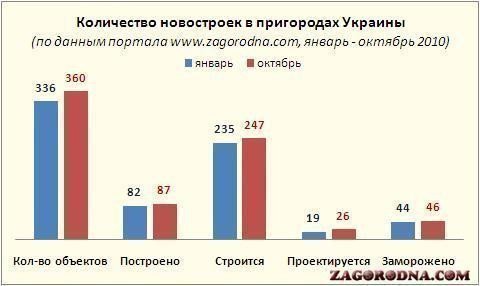 Victor Kovalenko said: "The minimum price for suburban buildings in Ukraine begins with $ 400 per square meter per Bobrovitsa Chernihiv region, while the maximum reaches 10,000 dollars for a" square "in an elite residential complex" Golden Beach "(Kurpaty, Crimea).

The average cost of housing in the suburban new buildings in Ukraine, U.S. $ / sq ft
(January-October 2010) 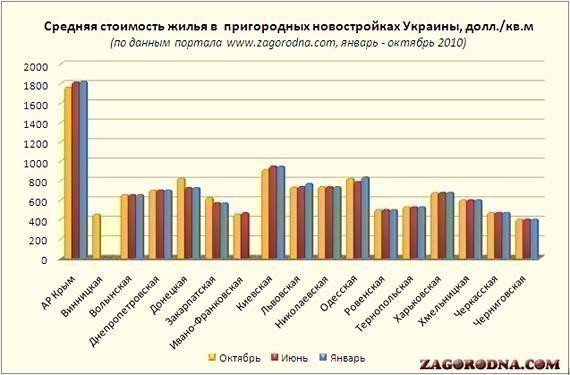 ©According to the portal www.zagorodna.com
According to statistics portal suburban real estate www.zagorodna.com compared with the beginning of the year see a growth of 1 square in Donetsk and Carpathian regions.
In other regions, notably a slight drop in the average value of the "square" in suburban buildings.

Average price of 1 sq.m in Ukraine compared with the beginning of the year decreased by $ 100 (12, 68%) and was at 28.10 U.S. $ 696 per sqm.
At an average cost per square meter lead Crimea from 1759 dolllarami (view all new developments of the Crimea) and the list zamyket Chernihiv region of $ 400 per "square".
View and purchase the required new building you can by clicking the link
Victor Kovalenko
www.zagorodna.com
© Protected by the law "On Copyright". Link to text and graphics required.