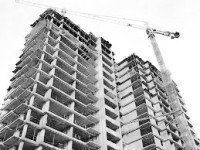 2013 the primary housing market suburb of Kiev was a little harder for previous, 2012. Views of new apartments increased by 20%, the number of actual sales transactions increased by 10-15%. In 2013, the average sales volume of construction was about 45-50 apartments per month. The number of proposals in the primary market of Kyiv region at different stages of readiness also increased.

Among the main causes activation of the market suburban housing in the satellite towns of the capital can be described as flexible installment from developers , low compared with Kiev cost per square meter , the active development of infrastructure and reduction in demand for secondary housing market (which resulted in the absence of a mortgage , cash limit calculations , estimates of innovations ) .

Related article: The cost of housing in new buildings near Kiev rose slightly

About 90 % of the apartments were purchased using installment from the builder. The average payment period is 2-3 years with an initial contribution of $ 80 thousand UAH.

Since January 1, 2013 in Ukraine earned the new registration procedure property rights to property and their encumbrances , introduced by the Law " On state registration of real rights on real property ." Now all certificates of title , a contract of sale , mortgage , other encumbrances and other documents relating to the right to housing and other real estate must be registered with the State Registration Service in the relevant registers of rights.

These innovations are widely announced , the market struggled to work under new conditions . The flames were fanned registry hacks fall that caused the unavailability of data for notaries and registrars. Distrust of the system only increased, on sales of real estate is affected negatively : deals , especially in the secondary market , became an epidemic delayed.

Furthermore, September 1, 2013 the National Bank set the maximum amount of cash payments at the level of UAH 150 thousand per day for individuals . The real estate market was not ready for such measures as it difficult to carry out transactions on the secondary market , because now all cash transactions, conducted usually in dollars without actually fixing the amount paid (except the mortgage ) , were outlawed. To sell and buy , you need to open a bank account and transfer funds to pay for the procedure and lose some money in exchange of dollars into hryvnia and back. At the general shaft small amount - the whole operation will cost 3-4 thousand UAH including exchange losses .

Market has caused indignation new procedure assessment for tax purposes and the calculation and payment of other obligatory payments , approved by the Decree of the Cabinet on 04.03.2013 № 231, which went into effect on August 1, 2013 . The document calls for a new kind of market appraisers specializing in the assessment of property for tax purposes it is . Waiting priced " a new " square meter , not one has broken the deal. In general , the 4th quarter real estate market is always characterized by high activity , but in 2013 , we think the results are statistically lose in 2012 because of the latest innovations .

According to preliminary estimates , which follow from the analysis of the situation in the primary housing market in Kyiv region and applications developers in the region in 2014 is planned to introduce a greater number of square meters of housing and infrastructure , rather than in the previous year .

Also, we can confidently confirm the unwillingness of developers to reduce the cost per square meter in the persistent and growing prices of building materials and energy .