Dynamics of the number of new buildings in the Kiev region in May 2019
(according to www.zagorodna.com)

Related article: The cost of housing in new buildings near Kiev rose slightly

Construction of new housing is carried out in 11 districts of the Kiev region.
In each of the districts, more housing is being built in the district center than in other settlements.
The exception is Kiev-Svyatoshinsky district, since it does not have a regional center. Most of the new buildings are in Sophia Borschagovka (42), Cherry (23), Gostomel (23), Kryukovschina (20), Petropavlovsk Borschagovka (16).

In second place by the number of new buildings in the Kiev region - Irpen with 213 new buildings (the city of regional subordination, is not included in the administrative-territorial division of the Kiev-Svyatoshinsky district. Author's note). Here, from the beginning of the year, 2 new projects appeared. The pace of construction of new housing in Irpen greatly decreased due to high competition and overproduction of new buildings. 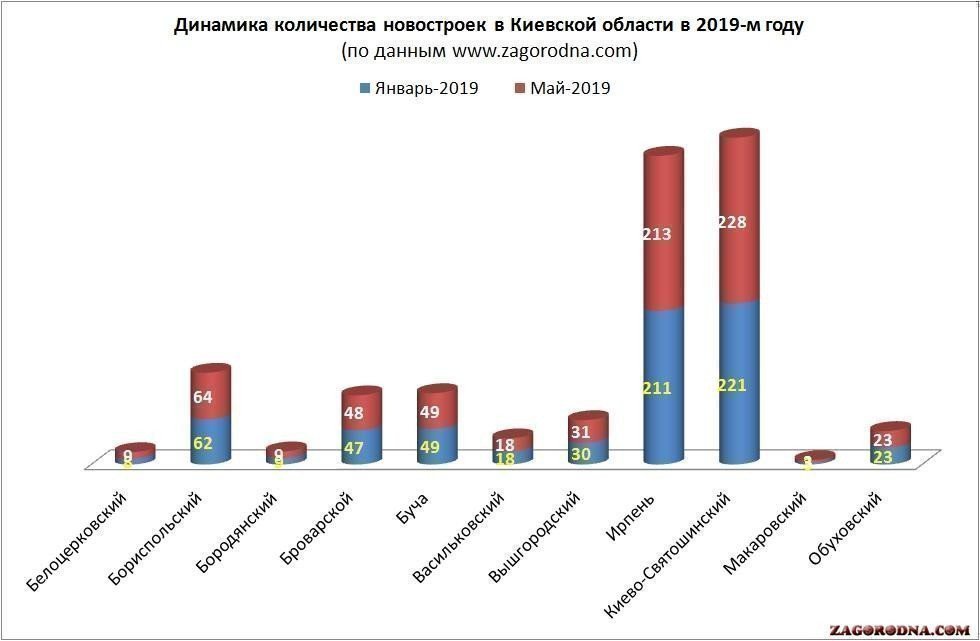 New projects are located mainly in the near suburb of Kiev at a distance of 3-17 km from the border of Kiev. These will be 3-13-storey houses, designed for 24-733 apartments.
In the new projects will be 1,2,3-room apartments ranging from 33 to 130 sq. M.
In new objects, the area of ​​apartments is less in comparison with the previously built ones. In addition, in the suburbs in many residential complexes are offered apartments with private courtyards, with individual heating.

In 414 new buildings of the Kiev region construction is completed, which is 16 new buildings more than at the beginning of the year. The number of built housing is 59.14% of the total number of new buildings near Kiev. The rate of commissioning of suburban new buildings decreased in comparison with the previous year.

As of June 1, 2019, 27 new buildings (3.86%) are at the design stage. This is 1 new building less than in January.
The leader in the number of projects in the primary real estate market in the suburb of Kiev is the Kiev-Svyatoshinsky district (9).

Director of consulting company RealEkspo, Viktor Kovalenko, noted that "in many complexes under construction, especially in the Kiev-Svyatoshinsky district, new queues are being built for the newly built or constructed residential complex, that is, this is reflected in the statistics. A new line is, in fact, a new construction, but since the construction of the complex has the same name and is carried out at the same address, we did not single out the new building as a new object.

Viktor Kovalenko considers “the emergence of new buildings in the form of one house for 20-40-60-80-120 apartments, the decrease in the number of floors of new projects to 3-4 floors. This is due to the economic situation in Ukraine, that is, the construction of small houses and housing complexes will need less money and with the introduction of new standards for reducing altitude from January 1, while building housing in Ukraine. "

According to Viktor Kovalenko, another trend of the Kiev suburb is “the emergence of residential complexes of business and elite class”.

Victor Kovalenko noted that “in terms of housing construction, Kiev region ahead of Kiev. The supply of new buildings in the suburbs of Kiev and the demand for them are consistently higher than in Kiev due to the low cost. ”

Earlier it was reported that the pace of construction of new buildings near Kiev increased.

Viktor Kovalenko
© Protected by copyright. Reference to the source is required.

more
The pace of construction of new buildings near Kiev increased