Price of property in cottage settlements of Ukraine reduced

Consulting Company RealEkspo "(Kiev) has monitored the market cottage villages in Ukraine.
As reported www.zagorodna.com in the first quarter of 2011 came with 8 new towns, and the cost per square meter, according to director of consulting company "RealEkspo" Victor Kovalenko, declined from 1290 to 1258 dollars, ie by 2.49% during three months of 2001.

Related article: Construction of cottage towns near Kiev slowed down 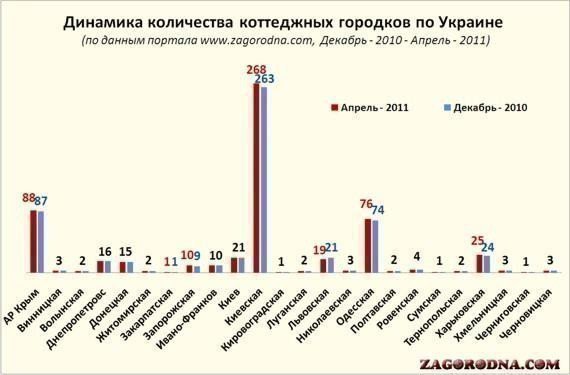 From these figures should be the following conclusion: the number of towns built in comparison with December increased by 4 of the town, being built - on 6 campuses and projects, decreased by 2 of the town.
Number of frozen projects remained at the level of last year.

New towns appeared in Kiev (5), Odessa (2), Kharkiv (1), Zaporizhzhya (1) areas.
In the Lviv region and Crimea, the number of towns has decreased.

As for the cost of 1 square. m in the cottage of Ukraine, according to Victor Kovalenko, the minimum cost is $ 200 in the Crimea and a maximum of $ -10,000 in the exclusive town of "Black Sea" in the Crimea. 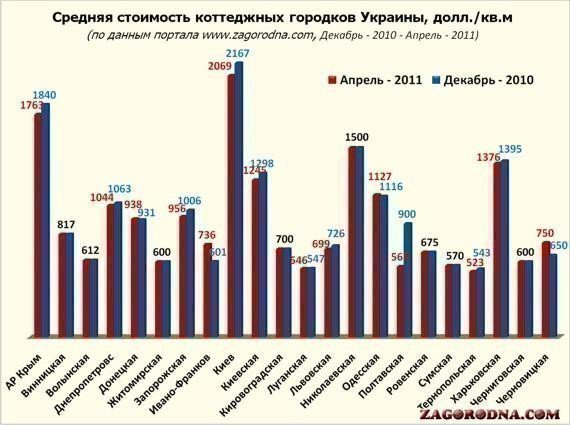 According to statistics portal www.zagorodna.com, the average cost of 1 square meter in the cottage of Ukraine during the first quarter of 2011 decreased by $ 32, which is 2.49%.

It should be noted that the largest drop in a square meter among the regions of Ukraine stated in the Poltava region. Here, the "square" has fallen from $ 900 per sqm to 562 dollars per sq ft (338 dollars for 1 square.) Or 37.56%.

In Donetsk and Odessa regions recorded growth of 7 per square meter to $ 10 per sqm in the first quarter.

Victor Kovalenko
© Protected by Law "On Copyright". Reference to the source obligatory
www.zagorodna.com