According to the director of "RealEkspo" Victor Kovalenko, on February 8, of the 178 newly Crimean 39.88% (71obekt) is located on the territory of Yalta City Council, including Yalta Gurzuf Simeiz Koreiz, Livadia, Gaspra, Massandra etc.
Second place among the regions of Crimea on the number of new buildings at Sevastopol from 29 new buildings 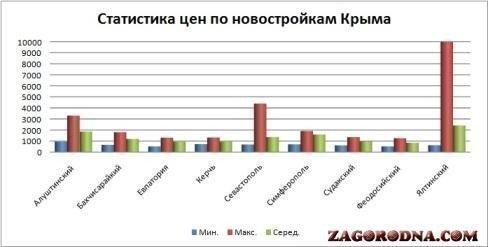 In Crimea, analysts' RealEkspo "noted the following trends:
number of built in 2007-2009, housing, but so far unrealized, is 24% (44 objects) of the total number of new buildings in the region;
predominant type of real estate, given the specificity, are apartment complexes, recreational and elite new buildings near the sea;
Despite the crisis, housing prices in many new buildings and are delivered at a high stage of readiness, not very different from the pre-crisis;
developers and builders krymskih apartments are in no hurry to lower the price, hoping to return wealthy investors from neighboring countries;
among developers and builders noticed a lot of companies with Russian roots, invested and invest in the construction of luxury housing in the Crimea.

Minimum price in new Crimea there at 510 dollars per square meter in a building under construction on the lane. Tankistiv in Feodosia and reaches a maximum of 10000 dollars per square meter apartment in elite residential complex "Golden Beach" in Kurpatov Yalta.
Average price of 1 sq.m in new Crimea on 08. 02. 21010 starts with 850 dollars in Feodosiya municipality (Feodosia, Koktebel, Ordzhonikidze, etc.) The leader Yalta with the average cost of 1 sq. m in 2413 dollars.
Average cost of 1 square. meters in new buildings of Crimea on February 8, 2010 up to 1344 dollars.

Price statistics on building projects of Crimea
(According to the company RealEkspo ", February 2010)