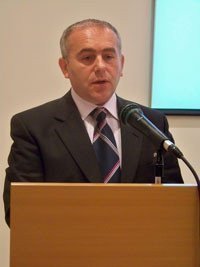 This was discussed in the report of the Director of the company "RealEkspo, organizer of the Forum and Exhibition" Invest 2009 "Victor Kovalenko at the Second All-Ukrainian Investment Forum" Investments in real estate and construction - 2009 "held in Kiev on June 2-3.

First, Viktor Ivanovich presented an updated market research of the cottage towns of Kiev and the region as of June. On the basis of a portal and suburban real estate and cottage villages Ukraine www.cottage-ua.com.ua was built report.
As of June 2009 in the Kiev region, there are 239 cottage townships, which are at varying stages of readiness: designed, built and built towns.

Related article: The house in Kiev: pluses and minuses

In fact, over the last two years the number of cottage villages in the Kiev region has more than doubled. More detailed information on the structure of the towns in the context of areas and stages of readiness can be found in our marketing issledovanii. Kolichestvo cottage villages in Kiev and region
(According to the company "RealEkspo", June 2009)
Analyzing the information gathered, a trend that the most under-appreciated until recently Raion - Boryspil and Brovarskyi - showed excellent growth dynamics of proposal (in Boryspil district has more than 2 times - up to 24 towns in Brovasky - slightly less than 2 times - up to 22 campuses). Considerably strengthened its position Svyatoshinsky Kiev, Obukhov and Makarovsky areas - these 3 areas have 54.2% of the total supply of cottage villages in the Kiev region.
The greatest number of cottage townships currently under construction in the Obukhov district - 15 boroughs and the Kiev-Svyatoshinsky district - 13 towns. Most projects cottage villages in Kiev Svyatoshinsky district - 13, Brovasky - 12. and Borispol - 11. This trend is fully consistent with our forecast, which was voiced in September 2008.
58% of cottage townships, compared with 63% in autumn 2008 at a distance of from 1 to 20 km from the city limits of Kiev (this is actually the optimal distance). This is the most expensive cottage villages with good transport accessibility. 28% against 29% last fall, cottage villages are located at a distance of 21 to 30 km from Kiev - this elite cottage villages (which are located in places with unique nature), and the cottage small towns targeted for middle and business class. At a distance of 30 km rather risky to build a cottage small towns - long distance now may deter potential buyers (the majority of cottage townships, which are located at a distance of more than 40 km from Kiev, now or frozen, or are in the planning stage, or very slowly being built). Therefore, to attract consumers, need to use different "chips" that can make a popular cottage community. It should also be noted that over time the average distance to the cottage villages will increase. To contribute to this reduction will be attractive plots of land at a distance of 20 km from Kiev and the construction of the Great Ring Road.
One of the main trends of the market of cottage building of the Kiev region, until recently, been a rapid increase in the prices of houses and land under them. Now there is just the opposite trend - the majority of market operators are ready to reduce prices, and some of them in two or more times. This situation leads to distrust of vendors from potential buyers.
The closer a cottage community is located in Kiev, the more picturesque nature, the more the cost of 1 square. m. In this case, the time from September 2008 until June 2009, the market situation has changed dramatically - the cheapest houses now stand is not from 1000 dollars per square meter, and from $ 500. Cottage towns, which are in unique locations and at the final stages of readiness slightly increased their prices, but mostly trend showed significantly lower prices. In some towns, cottage prices have fallen more than 2 times. In 11% (versus 9% in the autumn of 2008) cottage towns the cost of 1 sq. m total area of the house is worth more than $ 3000 now on the market 56% of cottage townships are sold at prices ranging from 500 to 1500 dollars per square meter in While the fall of 2008 these towns were only 37% (as at the beginning of 2008 - 32%). Business class to the cost of 1 m from 1500 to 3000 U.S. dollars is only 33% of the market supply to 54% of the autumn of 2008. In the future, also will increase the share of cottage townships economy class, with a decrease of business and premium class.
Cost of 1 square meter in the cottage of the Kiev region, cu
(According to the company "RealEkspo", December 2006 - June 2009)


Trends and prospects in the market of cottage building
The most popular cottages are small area from 100 to 250 square meters. m. These are the areas attracting the middle and economy class on the market.
In the long term it is expected that by the end of 2009 is expected to decrease prices by 8% in 2010, can grow at 10%, and in 2011 and in 2012. expected average annual growth rate of 8%.
Future market cottage real estate is for a cottage worth up to $ 250 thousand dollars, that is, for the cottage, which is able to get the average and economy class.
Among the construction materials in the construction of houses, despite the high price, the first place surely is a brick. This material is most familiar to buyers of cottages.
More attention is to attach the infrastructure necessary for healthy living in the cottage.
According to experts, taking into account the value of land, a country cottage today - one of the most lucrative investments, provided that the house was built by the construction company licensed in accordance with the approved project with the official registration of all necessary papers.

CONCLUSIONS
Until recently, the market experienced its infancy, during which the demand far exceeded supply, and companies, developing cottage projects, successfully dealt with "cream skimming". This is evidenced by the fact that most of the small cottage communities sold out with almost no advertising, resulting in a lack of a unified and generally accepted classification of cottage townships. But it should be noted that the market has changed dramatically. Purchasing power has significantly decreased and the number of declared and implemented by the towns has increased significantly. Therefore, buyers in their choice became more exacting when purchasing a country house. Consequently, the dynamics of sales in towns without a developed concept has been reduced considerably, and some stopped altogether. This trend will continue in the future. The saturation of cottage property in the next 3 years should be expected. Therefore, the maximum they can earn a company that will bring to market high-quality, balanced product at reasonable prices.
Viktor Kovalenko
www.zagorodna.com