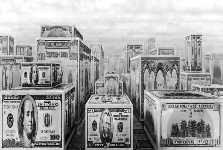 International consulting company Knight Frank presented the results of the index of world markets urban elite real estate (Prime Global Cities Index), which tracks the prices of luxury housing markets 26 cities of the world, for the III quarter. 2012 In 15 of the 26 cities covered in Prime Global Cities Index (58%) of the average prices for the 12 months remained stable or showed growth for III quarter. In 2012 this figure rose to 77% (20 out of 26 cities), which indicates the strengthening of the position of the elite segment worldwide.

Currently, the index is 18.7% more than in the II quarter. 2009, the rate of growth from that period to the end of III quarter. leading Hong Kong, London and Beijing - 52.9%, 45.4% and 39.5%, respectively. The dynamics of growth in the same period in the real estate market in Moscow was 8.4%, due mainly to two factors: the minimum value in the post-crisis period for the Russian capital were recorded in the IV quarter. 2009, also in Russia there were no price reductions offers comparable to other world capitals.

Five cities have shown double-digit growth for 12 months (from September 2011 to September 2012), Jakarta, Dubai, Miami, London and Nairobi - one of each major city of the region.

Asia-Pacific is leading - the cost of luxury housing in Jakarta increased by 28.5% in 12 months, the results of III quarter indicate that the demand for premium objects are not directly dependent on the state of regional economies: Asian cities in the top 10 ranking is 2, while the European 3. Preferences of wealthy buyers are increasingly shaped popular locations in the luxury segment.
www.zagorodna.com